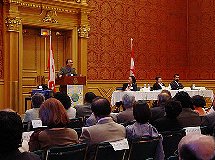 
Following the Keynote Address by Karen Armstrong, Azim Nanji emphasised the importance of pursuing an understanding of ‘common humanity’ through an acknowledgement and acceptance of its own diversity. Commenting on the notions of ‘respect for traditions’ and ‘traditionalism’ in the postmodern age, Nanji said that it was widely stated that tradition is ‘the living faith of the dead’ and traditionalism is ‘the dead faith of the living’. In reinforcing his point with the larger theme of the conference, Nanji stated that individuals should ‘aspire to understand how these traditions can influence the life of a community over time and space.’ He suggested that we need to look at the spectrum of Muslim traditions and experiences to see what it is that facilitates the ability to build bridges, as examples in Muslim history illustrate.

WEBB (www.webb-international.org) was established to mobilise women to engage in building bridges of human understanding and engage in positive action for peace and harmony. ‘Diversity in Islam: Bridging the Gaps’ was organised with the support of the Canadian Department of Foreign Affairs and International Trade, the Embassies of Indonesia, the Arab Republic of Egypt and the Islamic Republic of Iran.