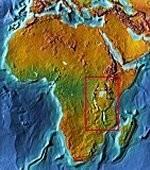 The Graduate Studies Department of The Institute of Ismaili Studies in conjunction with the Arts and Humanities Research Board (AHRB) Centre for Asian and African Literatures and the School of Oriental and African Studies' Centre of South Asian Studies organised a one-day conference entitled, “Literature and the South Asian Communities of East Africa” on March 21, 2003. The seminar gathered creative writers and scholars working in Britain who are engaged with literature written by and about the Asian communities of East Africa.


The one-day conference examined literature written in Kiswahili, English as well as languages of the Subcontinent, and culminated with a keynote reading by Booker Prize nominee Abdulrazak Gurnah, whose books include Paradise, Admiring Silence and By The Sea.


For at least 2,500 years, the east coast of Africa and South Asia have been partners in a network of Indian Ocean trade. It was not until the 19th century, however, that a significant number of South Asians settled in East Africa. The earliest settlers, including Ismailis from Western India, primarily Kutch and Kathiawar, lived and prospered on the island of Zanzibar as early as the 1840s. By 1866, the number of South Asians on the island sultanate

had grown from several hundred to 6,000.


South Asian migration to mainland East Africa began later in the century, with early migrants settling in coastal towns such as Lamu and Mombasa (in present-day Kenya). Labourers, clerks, bookkeepers, carpenters, masons and bricklayers were amongst the earliest of professions of many South Asians. The largest influx of South Asians to the Continent, however, occurred in the wake of the Uganda railway built between 1896 and 1901, with some 32,000 indentured labourers imported from the Subcontinent to East Africa by the British colonisers. Immigration records show that until 1940, there was still significant movement from India to eastern Africa.


Anti-Asian feelings and resentment, especially over the perceived economic successes of the South Asian community in East Africa, had been growing since the 1960s and climaxed in 1972 when Idi Amin expelled 80,000 individuals of South Asian heritage from Uganda. Many South Asians from neighbouring countries also fled and re-settled in Western Europe and North America.


The conference, which addressed the literature of and about these communities, concentrated on the following questions:


It is anticipated that the proceedings of the seminar will be published at a later date.


The Arts and Humanities Research Board Centre for Asian and African Literatures was founded in October 2000 and is a joint project between the School of Oriental and African Studies and University College London.


The Centre of South Asian Studies of the School of Oriental and African Studies was established in 1966 to coordinate the research of South Asian specialists spread widely throughout the university. Today, there are over 100 courses taught on South Asia at SOAS crossing many disciplines.