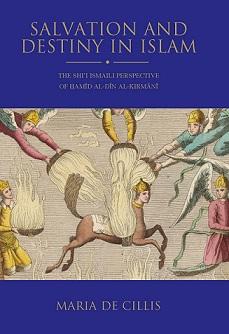 This publication provides an analysis of Hamid al-Din

al-Kirmani’s thought and sheds new light on the many layers of allusion which characterise his writings. Through a translation and analytical commentary of the eighth chapter of his Kitab al-Riyad, (The Book of ‘Gardens’), Salvation and Destiny in Islam provides an in-depth study of how al-Kirmani harmonised his views with those of earlier renowned Ismaili scholars, on issues of divine preordination and human redemption.

Al-Kirmani (d. after 411/1020) was one of the most important Ismaili theologians in the Fatimid period, who rose to prominence during the reign of the Imam

al-Hakim bi-Amr Allah (r. 386/996-411/1021). Al-Kirmani is generally acknowledged to have introduced al-Farabi’s adaptation of both Neoplatonic emanation and Ptolemaic astronomy into Ismaili philosophy, drawing extensively from them and substantially modifying them to fit Ismaili paradigms. In this volume, the author, Dr Maria De Cillis, analyses and attempts to provide a clear picture on al-Kirmani’s philosophically-charged theological stances, particularly on the question of divine predestination and the responsibility that people take for their for their own actions.

Medieval Islamic philosophers were deeply occupied with questions of predestination and salvation. These, together with issues of cosmology, the Imamat

and the eschatological role of the Imams and prophets were all Ismaili concerns. The author investigates al-Kirmani’s philosophical theology and sheds a new light on the ways it offered distinctive Ismaili interpretations of qada and qadar

By uncovering the many layers of allusion which characterise al-Kirmani’s writings, this book skilfully guides the readers through his metaphysical and esoteric correspondences and highlights his agenda of attempting to complement the often-contrasting views which had emerged amongst renowned Ismaili da‘is (missionaries) belonging to the so-called Iranian School of Ismaili thought.

The publication further details al-Kirmani’s ability to blend a number of philosophical traditions, including Neoplatonism, with Ismaili religious thought and how his metaphysical and political ideas became vital in underpinning a Fatimid version of Ismailism centred on the very significance of tawhid

(divine unity) and the indispensability of the shari‘a.

Speaking about her research and writing experience, the author and translator, Dr Maria De Cillis, commented:

“The nature of al-Kirmani’s writings is notoriously cryptic. It has been a truly challenging, yet rewarding task to engage not only with his thought but also with the ideas he held with regard to other complex Ismaili thinkers such Abu Hatim al-Razi (d. 322/934), Muhamad b. Ahmad al-Nasafī (d. 332/943) and Abu Ya‘qub al-Sijistani (d. c. 361/971). As the author, I hope that this book will clarify a few obscure points on the nature of often-misinterpreted Ismaili intellectuals, thereby enticing students and academics alike to delve with fresh eyes into the philosophical questions of medieval times that remain relevant and intriguing even in the 21st century.”

Offering new insights into Shi‘i and Ismaili philosophical thought, this publication will be of great interest to those in the field of Shi‘i studies, and more broadly, to scholars of medieval philosophy.