Dr Farhad Daftary
Co-Director and Head of the Department of Academic Research and Publications
Area of focus:

Farhad Daftary completed his early and secondary education in Tehran, Rome, and London, before going to Washington, D.C., in 1958. He received his B.A. and M.A. degrees from the American University there, and then continued his graduate studies at the University of California, Berkeley, leading to a Ph.D. degree in 1971. Subsequently, Dr. Daftary held different teaching posts, and, since 1988, he has been affiliated with The Institute of Ismaili Studies, London, where he is currently Co-Director and Head (since 1992) of the Department of Academic Research and Publications.

An authority in Shi'i studies, with special reference to its Ismaili tradition, Dr. Daftary has published and lectured widely in these fields of Islamic studies. In 2011 a Festschrift entitled Fortresses of the Intellect was produced to honour Dr. Daftary by a number of his colleagues and peers. As well as serving on various editorial boards, Dr. Daftary is a consulting editor of the Encyclopaedia Iranica (for Ismailism), co-editor (with W. Madelung) of the Encyclopaedia Islamica, and general editor of the “Ismaili Heritage Series”, the “Ismaili Texts and Translations Series” and the “Shi'i Heritage Series”. He has written more than 200 articles and encyclopedia entries and several acclaimed books, including The Isma<ilis: Their History and Doctrines (1990; 2nd ed., 2007), The Assassin Legends (1994), A Short History of the Ismailis (1998), Ismaili Literature (2004), Ismailis in Medieval Muslim Societies (2005), (with Z. Hirji) The Ismailis: An Illustrated History (2008), Historical Dictionary of the Ismailis (2012) and A History of Shii Islam (2013).  His edited volumes include Mediaeval Ismaili History and Thought (1996), Intellectual Traditions in Islam (2000), Living in Historic Cairo (2010), A Modern History of the Ismailis (2011), (with Gurdofarid Miskinzoda) The Study of Shi'i Islam (2014), Fifty Years in the East: The Memoirs of Wladimir Ivanow (2015) and Ismaili History and Intellectual Traditions (2018).  Daftary’s books have been translated into Arabic, Persian, Turkish, Urdu, Gujarati, Chinese, Indonesian and numerous European languages.

The Study of Shiʿi Islam presents papers originally delivered at the first international colloquium dedicated exclusively to Shiʿi studies, held in 2010 at The Institute of Ismaili Studies, London.

A History of Shi'i Islam

A History of Shi'i Islam has recently become the focus of international attention in the context of various conflicts and crises afflicting the Middle East.

A Modern History of the Ismailis: Continuity and Change in a Muslim Community

A Modern History of the Ismailis: Continuity and Change in a Muslim Community represents a first attempt into gaining a better understanding of the evolution of the Ismaili communities of various regions together with their heritage and literary traditions.

Living in Historic Cairo: Past and Present in an Islamic City

Living in Historic Cairo: Past and Present in an Islamic City - originally conceived as a companion to the homonym film - aims to capture the full story of the collaborative project in al-Darb al-Ahmar within the broader context of the history of the city of Cairo.

The Ismailis: An Illustrated History

The Ismailis: An Illustrated History contains some 400 images of manuscripts, artefacts and monuments, community documents as well as important historical and contemporary photographs.

Ismailis in Medieval Muslim Societies deals with aspects of Ismaili history and thought in medieval times.

Ismaili Literature: A Bibliography of Sources and Studies

Ismaili Literature: A Bibliography of Sources and Studies is the culmination of more than three decades of research and compilation undertaken by Dr Farhad Daftary, ever since he started his research on the history of the Ismailis.

Culture and Memory in Medieval Islam: Essays in Honour of Wilferd Madelung

Culture and Memory in Medieval Islam: Essays in Honour of Wilferd Madelung honours Laudian Professor of Arabic (Emeritus) at the University of Oxford and Senior Research Fellow at The Institute of Ismaili Studies, Professor Wilferd Madelung, for his contributions to the fields of early and medieval Islamic history and thought.

A Short History of the Ismailis: Traditions of a Muslim Community

Mediaeval Ismaili History and Thought is a valuable collection of essays on Ismaili themes, focused on the mediaeval period.

The Isma‘ilis: Their History and Doctrines

The Isma‘ilis: Their History and Doctrines provides a coverage of nearly 1300 years of the history of the Ismailiyya in an abbreviated manner, presenting a synthesis and summary of the latest scholarship in the field.

The Ismaili Imams: A Biographical History

The Ismaili Imas: A Biographical History is a highly illustrated book that presents for the first time the biographies of all the Ismaili imams, in a series of concise narratives recounting their lives and actions, and through them the Ismaili community’s history and heritage. 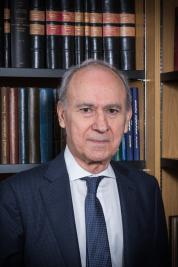 Dr Farhad Daftary
Co-Director and Head of the Department of Academic Research and Publications
fdaftary@iis.ac.uk