Dr Mir-Kasimov is Senior Research Fellow at the Department of Academic Research and Publications. He also teaches on the IIS graduate programmes (GPISH & STEP). He is an Associate Member of Higher Education Academy. He obtained his doctorate from the École Pratique des Hautes Études (EPHE), Paris. In 2003 he was the recipient of IIS’ Dissertation Writing Scholarship. His dissertation was devoted to the reconstruction of the doctrinal views of the Hurufis, one of the messianic movements strongly influenced by Shi‘i ideas which was influential in Iran and Anatolia in 14th and 15th centuries.

He previously studied intellectual history of Islam and oriental languages (Arabic and Persian) at Moscow University from which he received his BA, and at the EPHE, where he obtained a Diploma, with a grant from the French Government. After defending his doctoral dissertation, Dr Mir-Kasimov continued as post-doctoral fellow first at the Institut d’Etudes Avancées (IEA) in Nantes, France, and then at the Institut für Islamwissenschaft of the Freie Universität in Berlin, Germany, with the grant of the Alexander von Humboldt Foundation. He has also lectured at the French National Institute of Oriental Languages and Civilisations (INALCO), and at the École Pratique des Hautes Études in Paris. 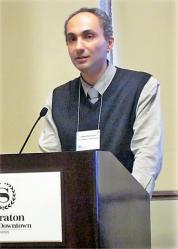