Zulfikar Hirji is an Anthropologist and Social Historian of Muslim Societies and Cultures. He is currently Associate Professor of Anthropology at York University, Toronto. He was formerly a Research Associate at The Institute of Ismaili Studies, London, and Junior Research Fellow at Wolfson College, Oxford. Professor Hirji received his DPhil from the University of Oxford, MPhil from University of Cambridge, and B.A. (Joint Honours) from McGill University. He also studied at The Institute of Ismaili Studies in the Graduate Programme of Islamic Studies and Humanities.

Professor Hirji specialises in the social and cultural expressions of Muslims in historical and contemporary contexts. He is interested in how human societies articulate, represent and perform understandings of self, community and other. He is particularly concerned with the diverse ways in which Muslims express and articulate issues of deep human concern as well as matters of daily life. He also interrogates knowledge produced about Muslims, by academics and others. His research interests have lead him to study a range of issues including the production and performance of identity, the role of cultural workers and social movements, the dynamics of family networks and inter-generational migration, the socio-legal formation of communal identity in colonial contexts, and form and context of urban violence in religiously plural societies. He has conducted archival research and multi-sited ethnographic fieldwork in various parts of the world including South Asia, East Africa, the Arabian Peninsula, Europe and North America. He teaches undergraduate and graduate courses in the Anthropology of Islam and Muslim Societies, Ethnicity and Nationalism, Visual Anthropology, and the Anthropology of the Art, Material Culture and the Senses. He is the co-author and co-editor of The Ismailis: An Illustrated History (Azimuth Editions in association with IIS, 2008), editor of Diversity and Pluralism in Muslim Contexts (I.B. Tauris & IIS, 2010) and author of Between Empires: Sheikh

-Sir Mbarak al-Hinawy (1896-1959) (Azimuth Editions, 2012). He has published a number of articles in edited volumes, journals and reference works and his books and articles have been translated into a number of languages including Urdu and Swahili. 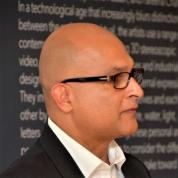