Karim Javan received his BA in Persian Language and literature at Ferdowsi University, Mashhad, Iran. In 1996, Karim went on to receive an MA in the same field with a dissertation entitled ‘A survey on the form and the content of Persian songs.’

After completing GPISH (2004), Karim went on to do his MPhil in Middle Eastern and Islamic Studies at the University of Cambridge with a dissertation on the ‘Emergence of Liberal Islam in the Post-Revolutionary Iran.’ This paper focused on the ideas of Abd al-Karim Soroush who is regarded as the most influential intellectual in the post-revolutionary Iran. He is a Muslim reformist who has tried to introduce a trend of liberal Islam by presenting a different interpretation of Sharia

based on the Shiʿi context.

In 2014, Karim was awarded the IIS Doctoral Scholarship to pursue a PhD (part-time) in Ismaili Studies at the School of Oriental and African Studies, University of London. His thesis, provisionally entitled ‘Qiyama in Ismaili Histories’ will explore  the circumstances and the reasons behind the event of “the Proclamation of Resurrection” in 1164 A.C in Alamut

, Persia. His paper will investigate the event from different aspects, to understand what socio-political as well as theological reasons were in work for the initiation of this event, and what consequences it brought for the Nizari Ismailis of Iran.

Whilst pursuing his PhD, Karim has been working for IIS and ISMC as a lecturer in Persian language. He currently works part-time as a Persian Manuscript Researcher within the Ismaili Special Collections Unit (IIS). 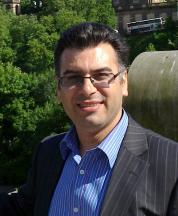