To attend in person or to register for the webcast, contact sismail@iis.ac.uk by Friday 26th April 2019.

Muhammad Hasan al-Husayni (1804–1881), also known as Hasan Ali Shah, was the 46th Imam of the Nizari Ismailis and the first Ismaili Imam

to bear the title of Aga Khan, bestowed on him by the contemporary Qajar monarch of Persia. This book is the first English translation of his memoirs, the Ibrat-afza, ‘A Book of Exhortation, or Example’, and includes a new edition of the Persian text and a detailed introduction to the work and its context.

The eventful career of this Imam coincided with the final decades of the Nizari Ismaili Imamate in Persia. The Aga Khan

’s permanent departure from Persia in 1257/1841, marked the transference of the Seat of the Nizari Ismaili Imamate

after more than seven centuries from Persia to India.

The Ibrat-afza sheds invaluable light on the events leading to this watershed in Ismaili history, which can be much better appreciated in the light of the Imam’s own faithfully recounted testimony.

The First Aga Khan: Memoirs of the 46th Ismaili Imam was published as part of the IIS’s Diamond Jubilee publications in honour of His Highness the Aga Khan IV. 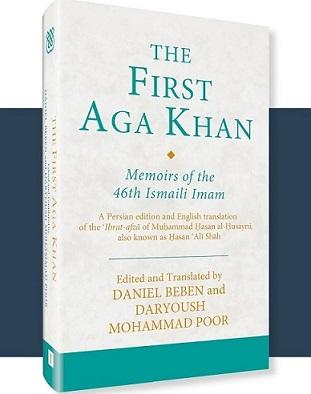 Join us at the Book Launch event with the editors, Dr Daniel Beben and Dr Daryoush Mohamed Poor. 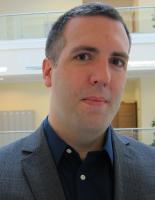 Dr Daniel Beben is Assistant Professor of History and Religious Studies at Nazarbayev University in Kazakhstan. He was previously a Visiting Fellow at the Ali Vural Ak Center for Global Islamic Studies at George Mason University and at The Institute of Ismaili Studies. His current research projects include a book on the history of Ismailism in Central Asia and a study of genealogical writings and practices among the Ismailis of Badakhshan from the 16th to the 20th century. 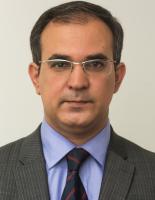 Dr Daryoush Mohammad Poor is a Senior Research Associate in the Department of Academic Research and Publications at The Institute of Ismaili Studies, and also lectures on the Institute’s educational programmes. His first monograph, Authority without Territory: The Aga Khan

Development Network and the Ismaili Imamate

(2014) is a fresh theoretical engagement with contemporary institutions of the Ismaili Imamate. He has recently completed a new Persian and English edition of Shahrastani’s Maljis-i Khwarazm and an evaluation of the impact of Shahrastani’s works on the discourse of qiyamat among Nizari Ismailis, which awaits publication.

Reflections on Contemporary Sufism: Exploring Past Trends and Past Tendencies
A Baroque Jesuit’s Encounter with the Qur’an: The Translation and Commentary of Ignazio Lomellini (1622)
Approaching Religious Texts in Early Islam: The Sanaa Qur’an Palimpsest as Example