Abstract of Professor Afzal Ahmed’s lecture: “The Mutual Influence of Learning and the Development of Mathematical Thinking in the Arab Civilisation during 900-1200 AD” 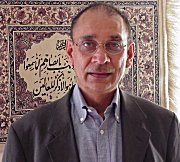 As part of the Norwegian National Commission for UNESCO’s “Dialogue with Arab Civilisations” programme, IIS Governor Professor Afzal Ahmed was invited to lecture and participate at the three-day Oslo-based conference, “Custodian, Creator and Communicator: Arabic Mathematics and Science in the period 700-1200”. The conference, organised by the Norwegian National Commission for UNESCO in association with the Norwegian Council for Mathematics, highlighted the influence and impact of Arab mathematics and sciences in the larger mediaeval world.


Professor Afzal Ahmed’s opening lecture entitled “The Mutual Influence of Learning and the Development of Mathematical Thinking in the Arab Civilisation during 900-1200 AD” focused on reviewing both the nature of mathematics as well as the processes of their teaching and learning. His presentation drew on examples from Arabic scientific thinking between the years of 900-1200 CE. In order to develop an appreciation of the study of mathematics as a human activity, he recommended a study of the historical context in which mathematics has developed. Through an appreciation and understanding of the historical context of the development of ideas, in this case the contribution of Arab Civilisation to scientific and mathematical thought, the field of mathematics can be made more accessible and applicable to a greater number of people.