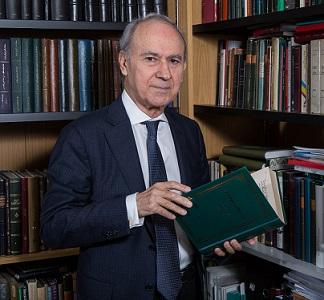 On 26 June, a special event was hosted in Tehran, Iran, to honour the academic contributions of IIS Co-Director, Dr Farhad Daftary, to the study of Islamic and Ismaili studies. The event was organised by Bukhara

(a prestigious Persian language academic journal) and the Centre of the Great Islamic Encyclopaedia. At the event, a Persian translation of Dr Daftary’s publication A History of Shiʾi Islam was also launched. Academics, students, the general public, as well as some members of the Ismaili community were in attendance.

During the course of the event, various individuals paid homage to Dr Daftary. In his remarks, Ali Dehbashi, the Chief Editor and Publisher of Bukhara, described him as the “most prominent historian of contemporary Shiʿi Islam.” Mr Bujnordi, Director of the Centre of the Great Islamic Encyclopaedia shed light on the life of Dr Daftary and praised not only his academic achievements, but also his leadership and visionary approach to the study of Islam in general, and the history of Shiʿi Islam in particular. He sincerely thanked Dr Daftary for the monumental English translation of the Great Islamic Encyclopaedia, published in a prestigious manner by Brill, under the title Encyclopaedia Islamica.

Mr T. Ettehadiyya, Director of Nashr-i Farzan-i Ruz - publisher of the Persian publication Tārīkh-i tashayyuʿ (A History of Shiʾi Islam) - paid tribute to the pivotal role Dr Daftary has played in their long-standing partnership with the IIS and how this collaboration has resulted in twenty-one books by Dr Daftary and other scholars at the IIS, being published in the Persian language over the years.

Professor Ahmad Ali Muwaḥḥid from Tehran University gave the audience a detailed description of A History of Shiʿi Islam, highlighting its relationship with The Ismailis: Their History and Doctrines. Praising the style of authorship of both books, he added, that in our time, throughout the academic world and in relation to Shiʿi history, Dr Daftary is a recognised authority.

Following on from the speeches, a short film was screened in which Dr Daftary further elaborated on his publication, whilst Dr Jalal Badakchani - a former Senior Associate at the IIS - was invited to read a special message of gratitude on behalf of Dr Daftary. In his message, Dr Daftary emphasised the role of the IIS in providing a better understanding of Shi‘i Islam in the West, through its various research and publications programmes. He also highlighted the role of the IIS in deconstructing the myths and misrepresentations of the Ismailis.

Watch the short film screened at the event (in Persian) and download the Persian transcript with English translation here.