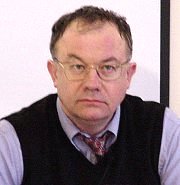 The 3rd session in the “Civil Society in Comparative Muslim Contexts” seminar series was hosted by the Institute on February 16th, 2001. Dr Olivier Roy, a renowned scholar who has also been involved in international peace-making initiatives in the region, spoke on the topic of “Civic Identity in the New Central Asia”. Dr Roy surveyed the interplay of tradition and modernity in the quest to root civic culture in the post-Soviet republics of Kazakhstan, Kyrgyzstan, Tajikistan, Turkmenistan and Uzbekistan.

Forthcoming seminars in this series will include: Dr Iftikhar Malik on identity politics in Pakistan; Dr Ziba Mir-Hosseini on gender in post-revolutionary Iran; and Professor Abdou Filali-Ansari and Dr Norani Othman on the prospects for civil society in the Maghreb


Details of those and other future sessions appear on the Seminars, Conferences, Public Lectures pages, which in addition to offering regular updates on the series will also provide information on conferences and public lectures in which the Institute participates.