“The Good Society: An Ethical Perspective” was the title of the fifth seminar in the IIS series “Civil Society in Comparative Muslim Contexts” held on Friday May 4, 2001. Professor Azim Nanji, Director of the Institute, traced the notion of a “Good” Society to the Qur’an

and the “Constitution” of Medina noting that historically Muslim societies have been engaged in a moral and ethical discourse with a view to creating the conditions for a “Good” Society. Amongst examples of such a discourse are the Grameen Bank Housing Project in Bangladesh – a co–operative non–governmental association that first began a loan programme, without collateral, for the rural poor to help them initiate income–generating schemes; the Kampung Improvement Programme – an urban self–help community planning programme in Indonesia and the Aga Khan Rural Support Programme in the Northern Areas of Pakistan and in India. 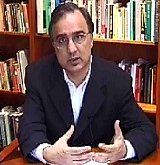 Professor Nanji asserted that ethics should not be considered in isolation, but rather “we should consider the institutionalising of ethics to include the participation of communities, governments, foundations … we need to understand the process and aims of civil society.” He observed that societal issues relating to bio–medicine, the environment and corporate conduct requires Muslims and non–Muslims to generate fresh ethical perspectives that draw inspiration from both secular and faith–based conceptions of ‘The Good.’


The Institute looks forward to welcoming a host of distinguished speakers at future sessions in this series. The next seminar in June will include Dr Ziba Mir–Hosseini on gender in post–revolutionary Iran and Professor Abdou Filali–Ansary and Dr Norani Othman on the prospects for civil society in the Maghreb

and Southeast Asia. In the autumn, Professor Ersin Kalaycioglu will speak on the relationship between Islam and civic culture in Turkey.


Details of future sessions appear on the Seminars, Conferences And Public Lectures pages which in addition to offering regular updates on the series, will also provide information on conferences and public lectures in which the Institute participates.


Extracts of Dr Amyn B Sajoo's Introductory Remarks to “The Good Society: An Ethical Perspective.”


An Abstract of “The Good Society: An Ethical Perspective” by Professor Azim Nanji