IIS Commemorative Lecture Connects the Past, Present and the Future 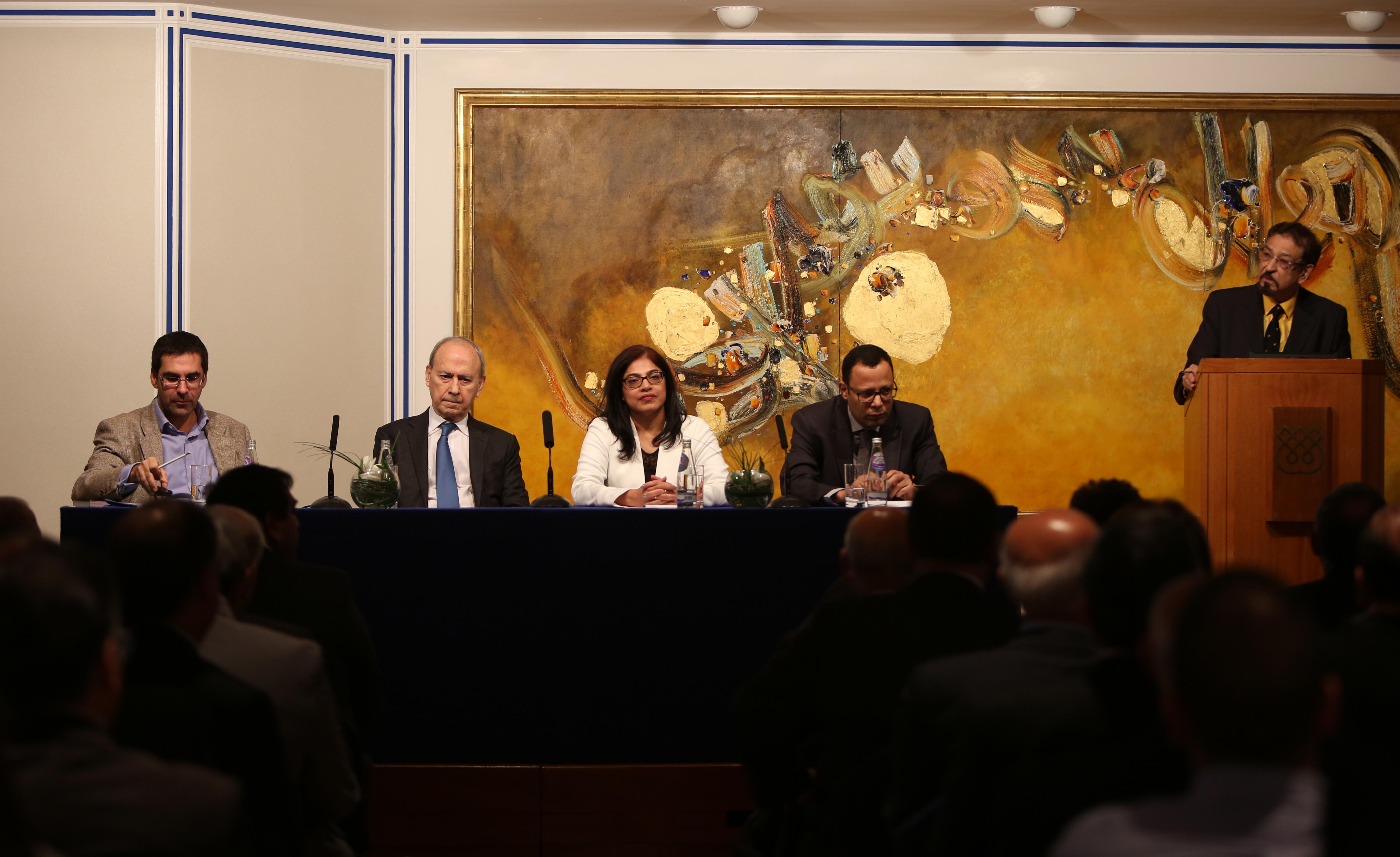 November 2017 sees the 40th anniversary of the formal inauguration of The Institute of Ismaili Studies, London. To mark this important milestone, which falls during His Highness the Aga Khan

Four short talks explored themes integral to the Institute’s work: heritage, knowledge, people and the future. The talks were followed by a lively discussion with the audience on the role and relevance of an academic Institute devoted to Ismaili and Shi‘i studies in the modern world.

The speakers were introduced by IIS Governor, Dr Mohammed Keshavjee, who provided an overview of the IIS’ work over the past four decades. Dr Keshavjee gave a synopsis of the professional work and achievements of the four speakers, ending with an acknowledgement of the outstanding work of Dr Farhad Daftary which was met with an ovation of appreciation from the audience.

Dr Farhad Daftary, Director of IIS, who has been with the Institute for 29 years and is the author of many seminal and ground-breaking publications on the history of Ismailis and Ismailism, spoke about the importance of the concept of heritage. Dr Daftary outlined how the IIS’ work has been instrumental in the preservation of Ismaili heritage. He described how he and other scholars within the IIS have continued the pioneering work of scholars in the early 20th century, particularly that of the Russian scholar Vladimir Ivanow, in unearthing and reconstructing Ismaili history through his study of long-hidden manuscripts. Dr Daftary stressed the importance of correcting the common misconceptions about the Ismailis, noting that even well into the 20th century there were orientalist works still being published that described Ismaili beliefs and practices as heretical. One particular legend, on which Dr Daftary has spent much of his academic life, is the perpetuation of the ‘assassin’ myth. “It takes time to debunk and deconstruct legends”, Dr Daftary told the audience, adding that “there has been a change in perception, at least in part, due to the work the Institute has done to facilitate greater access to knowledge.”

Exploring the theme of knowledge, Dr Omar Ali-de-Unzaga, Head of Qur’anic Studies and the Deputy Head of Academic Research and Publications, talked about his personal experience of studying at the IIS and shared with the audience the impressive careers of his former classmates. Dr Ali-de-Unzaga discussed his personal passion and area of specialism, the Rasa’il Ikhwan al-Safa’ (The Brethren of Purity), an encyclopaedic set of epistles to which the Institute has devoted a series of publications, commissioning leading international scholars to make an edition of these epistles, and to providing them with context and commentary. Dr Ali-de-Unzaga spoke of the role of the IIS in developing and disseminating knowledge through its publications and other academic endeavours.

Dr Laila Halani, Head of Graduate Studies, also gave personal insights into her first experiences of the IIS as a student in the early nineties, and how this led to her now heading the department that she “grew up in.” In her talk on people, she discussed how the two IIS graduate programmes were creating international “change agents” and how the Ismaili youth of today are able to access the fruits of the Institute’s research, through the curriculum and the guidance of teachers trained and supported by the IIS.

Dr Walid Ghali, Head Librarian at IIS and its sister organisation AKU-ISMC, touchingly mentioned how a catalogue of manuscripts published by IIS changed the course of his life, when it was gifted to him. Dr Ghali discussed the future of academic research, and how the Institute plans to utilise technology to preserve and make rare books and manuscripts accessible. Dr Ghali spoke of the facilities currently being constructed at the Institute’s new home in King’s Cross, and how these will improve access for visitors to the library and provide an opportunity to engage with some of the Institute’s special collections. Dr Ghali also spoke of the exciting plans underway to make the library’s digital collections more widely available. He outlined the library’s hopes for deeper cooperation with other institutions of world standing, and the plans to digitise the hugely significant collection of unique manuscripts for future study by accredited academics.

Guests were also able to explore a 5 metre illustrated timeline display showcasing some of the key milestones in the 40 years of the Institute’s history.

This commemorative multi-speaker lecture in London is part of a series of talks that the IIS will be delivering during its 40th anniversary year.