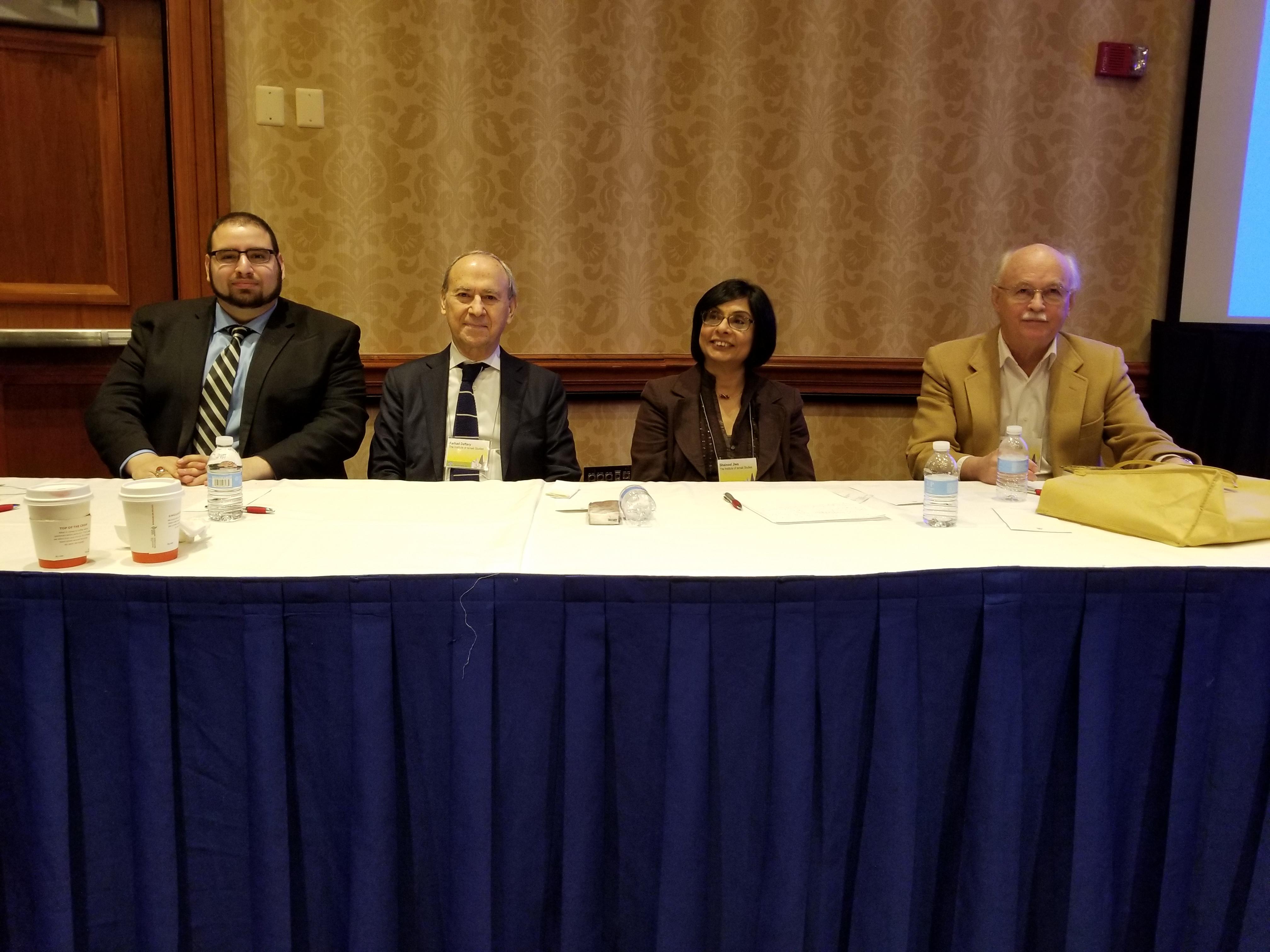 The Institute of Ismaili Studies participated in the Annual Conference of the Middle Eastern Studies Association of North America (MESA), a leading international academic organisation promoting research on the Muslim world. Held in Washington, USA, from 18th to 21st November 2017, the conference brought together over 3000 international scholars, educators and those interested in the study of the history, literature, politics, arts and cultures of the Muslim world.

Chaired by Dr Farhad Daftary, the IIS sponsored its seventh panel on Fatimid Studies, which included contributions from Dr Shainool Jiwa, Dr Paul E. Walker and Mohamad Ballan. Despite the recent advances in the study of the Fatimid period - partly as the result of new editions, the translation of primary texts, several major book-length studies, and many smaller publications - there are still several aspects of Fatimid ventures which require scholarly engagement. The IIS panel members presented several new ideas and research, shifting the narrative on Fatimid Studies.

Reappraising the reign of the fifth Fatimid caliph

, Dr Shainool Jiwa presented a paper on Between the Founder of Cairo and the Caliph of Cairo: An appraisal of the reign of the Fatimid Imam

-caliph al-‘Azīz bi’llāh – in which she challenged some of the existing perceptions that have portrayed al-‘Azīz as an individual who was more interested in princely pursuits such as lion-hunting, falconry and the collection of precious gems and rarities, than in the governance of the state. Through a close reading of a range of Ismaili as well as other primary sources, Dr Jiwa established that at the helm of sovereignty, al-‘Azīz strived to create institutional frameworks to strengthen Fatimid rule. Ibn Taghri Birdi (d. 874/1470) - an otherwise zealous critic of the Fatimids

- noted that al-‘Azīz was “was the best of the Fatimid caliphs, notably in comparison to his father, al-Mu‘izz and his son, al-Hakim.”

Dr Paul E. Walker presented a paper on Titles of Honour and Status in the Fatimid Realms. The use, allocation and control of titles had been identified as a major feature of the Fatimid dynasty. Titles - which were increasingly awarded - became elaborate occasions, where a formal sijill was read publicly to announce the new titles bearers, followed by gifts, a procession, and more. The Egyptian scholar Hasan al-Basha had published an essential study of these laqab (plural alqāb) throughout the Islamic world, where he had noted many examples for the Fatimids. Dr Walker found that several sources were not used in this study, and subsequently, a newly developed catalogue which lists the titles bestowed by the Fatimid caliphs on elite members of their government has been published – this now enables researchers to engage in a better comparison with other dynastic practices.

Ifriqiyah: A Reinterpretation of the Massacres of 407/1016, in which he revisited the cataclysmic events that undermined this heterogeneous society. His paper assessed the available Arabic textual evidence for these events, including historical chronicles, poetry, biographical dictionaries and hagiographies, composed between the 5th/11th and 8th/14th centuries, much, if not most, have never been previously consulted for this topic. His research demonstrates that the violence was underpinned by various social, political, economic and religious factors and was linked to the increasing sectarian tensions throughout the Fatimid caliphate

during the reign of al-Ḥākim bi Amr-illāh, whose social and religious policies sometimes alienated certain segments of society. The massacres in Zirid Ifrīqiyah marked the beginning of the end of Fatimid rule in North Africa, and also witnessed the emergence of the hegemony of the Maliki-Sunni school of thought in Ifriqiyah.

“Fatimid studies has gained tremendous momentum over the past few decades. As new sources continue to come to light, and the previously known ones benefit from better editions and translations, the field is attracting a pool of younger scholars from a variety of disciplinary backgrounds, thus invigorating the study of the Fatimids as part of the broader mapping of the mediaeval Mediterranean world. The Institute of Ismaili Studies is well-placed to contribute to this scholarly discourse.”

For the past seven years, the IIS has been sponsoring a panel and sharing their research on Fatimid Studies at MESA. Several of the papers that have been presented at the conference, are now available in a new publication entitled, The Fatimid Caliphate, Diversity of Traditions, edited by Dr Farhad Daftary and Dr Shainool Jiwa. The publication brings together research from various aspects of Fatimid rule, including notions of authority, models of administration, the nature of religious rivalries, the role of women in society, and the legacy of the Fatimid caliphate following its demise.