IIS Publishes Meaning of the Word: Lexicology and Qur’anic Exegesis 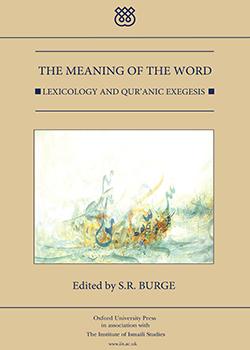 The Institute of Ismaili Studies is pleased to announce the publication of The Meaning of the Word: Lexicology and Qur’anic Exegesis, edited by Stephen R. Burge. This volume is the thirteenth in the Qur’anic Studies Series. It arises out of a larger research project that explored the ways in which interpreters of the Qur’an

– in exegesis, as well as other fields, such as hadith

, law and translation – engaged with the meaning of words (lexicology) in the Qur’an.

The basic intention of Qur’anic exegesis (tafsir) is to understand what the text of the Qur’an means. Before attempting to understand anything of the Qur’anic worldview and its ethical values, there is a need for exegetes to engage with the individual words found in the Qur’an itself. Yet, exegetes and translators, whether medieval or modern, have different theological perspectives, which influence how they do this.

This volume provides the first in-depth discussion focusing on the relationship between the interpretation of the Qur’an and the meanings of words, from the beginnings of Qur’anic exegesis to the contemporary period. The contributions approach this relationship though studies of a wide range of subjects, from linguistics to literary criticism, and from law and gender to mysticism. There are examinations of the importance of words in interpretation in the Arab, Persian, Turkish and European worlds; and studies of the earliest discussions of Qur’anic lexica to those made in twentieth century Turkey and recent English translations of the Qur’an.

This volume will be of interest to scholars and students working in the fields of tafsir and Islamic intellectual history, as well as linguistics, law and translation studies, and the study of religion and religious texts more broadly.

This volume of essays, dealing with how Muslims have grappled with issues of meaning in the Qur’an through lexicography and translation throughout the centuries, brings together some excellent research and penetrating analysis. It provides a valuable contribution to the discipline.

In this volume, a fascinating array of subject areas, including theology, mysticism, the linguistic sciences, literary criticism, law and translation, provides the thematic backdrop against which key aspects of classical exegetical discourses are gauged and contextualised.