Although Gujarat came into being as a separate state of independent India in 1960, questions of identity and belonging to the Gujarati world had been around for several decades. A major marker of such belonging was, and continues to be, the Gujarati language, which was carried around the world by the active Gujarati diaspora. Gujarati-ness was also a contested identity, encompassing a variety of communities and religious groups, each with their own claims on Gujarati-ness and the Gujarati language. These included regional and caste groups in Gujarat, Saurashtra and Kutch as well as Jains, Vaishnavas, Sunni and Ismaili Muslims, Parsis and Christians.

For reasons that are not entirely clear, there has been a relative lack of interest in scholarly work on Gujarat in comparison to India’s other regions. The workshop, jointly organised by Samira Sheikh

(The Institute of Ismaili Studies and Wolfson College, University of Oxford) and Rachel Dwyer (School of Oriental and African Studies, University of London) consisted of 15 presentations divided into four sessions organised around particular themes.Zulfikar Hirji, Research Associate and Coordinator of the Ismaili Living Traditions Unit at the IIS and Laila Halani, an IIS doctoral scholarship recipient and DPhil candidate at the University of Oxford presented papers. 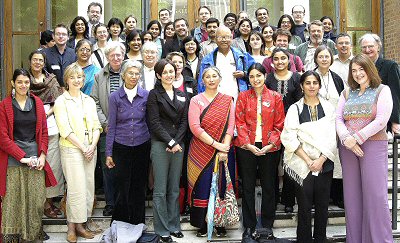 The workshop was further supported by the Centre for South Asian Studies and the South Asia Research journal.