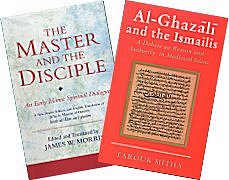 The Institute announces two of its recent publications: Al-Ghazali and the Ismailis: A Debate on Reason and Authority in Medieval Islam by Farouk Mitha and The Master and the Disciple: An Early Islamic Spiritual Dialogue, the Arabic text and English translation of Ja‘far b. Mansur al-Yaman’s Kitab ‘Alim wa’l-Ghulam, by James W Morris. Both works are published in collaboration with I. B. Tauris.


Al-Ghazali and the Ismailis, the 5th volume in the Ismaili Heritage Series, examines the Kitab al-Mustazhiri, one of the more detailed works of the 11th century theologian, Abu Hamid al-Ghazali (d. AH 505/1111 CE). This work is part of his polemical engagement against the Ismailis of the Fatimid and early Alamut

periods. Through the treatment of the text as a repository of ideas as well as a window into the social, political and intellectual world of AH 6th/12th century CE Islam, Farouk Mitha analyses the ways in which al-Ghazali was influenced by the Ismailis. The Kitab al-Mustazhiri also provides an outline of the Ismaili doctrine of ta‘lim as articulated by Hasan-i Sabbah, which is no longer extant in Ismaili sources.


Presented as a series of didactic dialogues, The Book of the Master and the Disciple, the Kitab ‘Alim wa’l-Ghulam by the AH 4th/10th century CE Yemeni author, Ja‘far b. Mansur al-Yaman and translated and edited by James W Morris, preserves in authentic form a glimpse of the character of Ismaili thought and activities in the period prior to the establishment of the Fatimid state in AH 296/909 CE. In addition to being a key source of pre-Fatimid Ismaili thought, this book is uniquely important as an elaborate example of the narrated dialogue form in Arabic literature. It consists of a series of dramatic dialogues between the ‘Master’ or ‘Knower’ (‘alim) and his young disciple (ghulam) and their own encounters with other seekers of truth and justice. These archetypal encounters, reminiscent of the Platonic dialogues (although probably unknown to the author), underline the full variety of human capacities and the corresponding methods of spiritual pedagogy and guidance. The Book of the Master and the Disciple is the 3rd volume in the Ismaili Texts and Translations Series and includes a critical edition of the Arabic text and an English translation with a contextual introduction by James W Morris.


Information about the Institute’s future monographs is available on the Forthcoming Publications page.