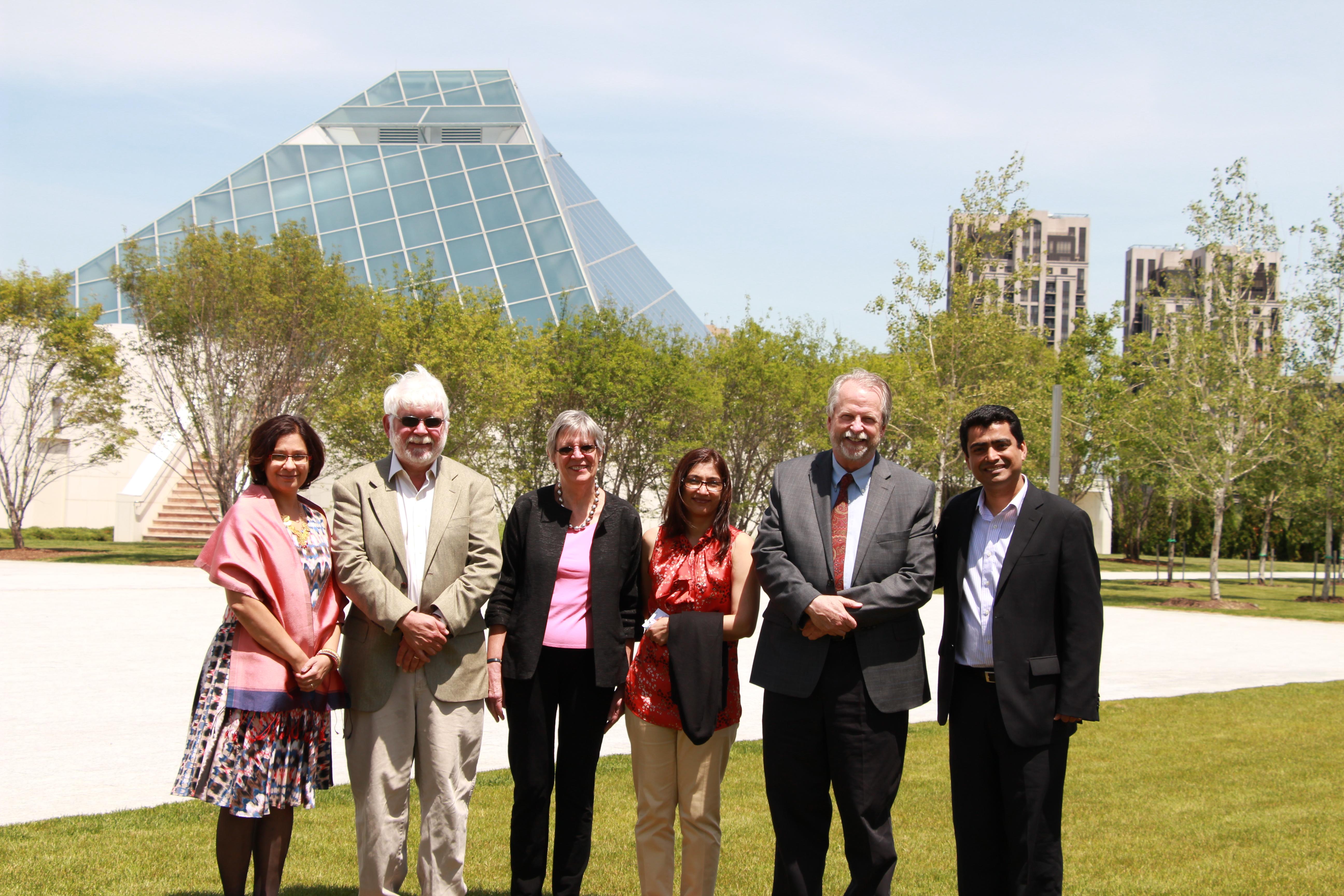 Over fifty IIS alumni from across North America came together in Toronto, Canada, for their Annual General Meeting to explore Celebrating Pluralism and Cultural Diversity: Art, Architecture and Music in the Muslim World from 19-21 June, 2015. Over the course of three days, the alumni engaged with scholars, as the newly opened Ismaili Centre, Aga Khan

Park and Aga Khan Museum provided both a backdrop and context for the weekend's thematic exploration.

The Meeting commenced with a welcome address from North American Chapter Group President Shahnaz Savani (WTEP 1993) and Secretary Dr Karim Gillani (GPISH 2003), followed by a detailed overview of the IIS' current initiatives delivered by the Head of Community Relations, Mr Shiraz Kabani. Mr Kabani's update on publications, programmes and developments related to IIS’ permanent premises and student housing facility at King's Cross invited the Alumni to reflect on the exciting opportunities available to both new students and to over 400 IIS alumni.

Following the introductory addresses, Alumni were treated to a guest panel featuring the Aga Khan Museum's Leadership team exploring the Museum's vision, future directions, current programming and highlights of the permanent collection. Museum Director, Dr Henry Kim explained the ways in which the Aga Khan Museum stands apart from other Museums in its outlook and approach to connecting cultures. Curatorial Assistant, Ms Ghazaleh Rabiei, highlighted key pieces from the Museum's collection, from detailed and expensive illustrations produced for the court to advanced ceramics used more commonly. Head of Performing Arts, Amirali Alibhai provided a glimpse into the diverse range of performances showcased at the Museum, with artists spanning from Mauritania to the Ukraine. From all three presentations, the Museum's role in changing monolithic perceptions of Muslim civilisations and engendering rich understandings of the inherent diversity in the Muslim world resonated strongly.

The first day of the meeting ended by taking alumni back to the days of early Islamic Art with an enthralling lecture by Professor Jonathan Bloom from the Boston College of Arts and Sciences on Islamic Art and Architecture of Fatimid North Africa and Egypt. From Kairouan

to Cairo, alumni were reminded of the great achievements in Fatimid Art that made their works highly coveted items by collectors throughout modern history.

Following chronologically from Professor Bloom's lecture, the second day of the conference moved forward in time and across continents to discuss the arts of Iran and Central Asia and the wise restoration of Mughal Gardens of India. Using objects from the Aga Khan Museum's collection, Professor Sheila Blair, of the Boston College of Arts Sciences, explored four main themes and five main periods in Iranian and Central Asian art. Through her animated and engaging lecture, Professor Blair left alumni with a more nuanced understanding of the importance of the Museum's collection of Persian artefacts.

Moving eastward still, the next specialist talk was delivered by Professor James Wescoat, Aga Khan Professor at MIT's School of Architecture in his session entitled Pluralism and Diversity in Indo-Islamic Gardens: Retrospect and Prospect. Professor Wescoat introduced participants to three restoration projects related to gardens, inviting three conversations in a participatory planning style workshop. Alumni discussed a range of topics, from the challenges of heritage conservation in conflict ridden environments such as Gujarat to the inherent cultural wisdom of water management present in the Indo-Islamic culture. Presenting in a multidisciplinary manner and reinforcing an understanding of the multiple impacts of architecture, Professor Wescoat moved seamlessly between discussions of the relationship between landscape and the built environment with culture, religious inspiration, socio-economic impact and diversity.

Following a busy morning of lectures, alumni spent the afternoon exploring the treasures of the Aga Khan Park and the Aga Khan Museum, with guided tours led by Dr Nargis Virani. Alumni were also invited to an inspirational evening program of Enchanting Sufi Music & Culture: Echoes from the Mughal Era led by Dr Karim Gillani and the Sufi Music Ensemble held at the Ismaili Centre.

Continuing on the same note of devotional and poetic music, the final specialist talk was presented jointly by Professor Regula Qureshi and Dr Karim Gillani of University of Alberta's Department of Ethnomusicology. Professor Qureshi introduced conceptual frameworks to guide the mind and the ear to extract from music cultural vignettes. Dr Gillani then provided a case study on the ways in which the Sufi poetry of Sant and Bakhti traditions in India has been appropriated and popularised by Bollywood, at times to the detriment of its original context and intent.

This year's meeting featured four showcases of research undertaken by alumni, presented on the final day of the conference. To start off the morning, Mr Alnoor Kassam (WTEP 1991) performed devotional poetry with the help of the electric guitar in his presentation on Expressions of Universal Devotion Echoed in Personal Piety. Professor Karim H. Karim (McGill 1984), Director of Carleton University's Centre for the Study of Islam, challenged alumni to consider the place and institutional responsibility of preserving and maintaining cultures of Ismaili Art in his session Re-thinking Islamic Art and Ismaili Art. As curator of the Ismaili Centre Toronto's exhibitions and programmes, Dr Zulfikar Hirji (GPISH 1997) elaborated on the next five years of outreach engagements at the Ismaili Centre Toronto and the role played by the Ismaili Centre in fostering debate and discussion for the broader community. Lastly, Ms Sehr Tejpar (GPISH 2012) presented research from her GPISH field project on the lived reality and experience of vernacular residential architecture in Khorog, Tajikistan, and guidelines for future city planning that can be drawn from the Pamiri Chid.

The alumni meeting culminated with a tour of the Ismaili Centre, made all the more poignant in the wake of recent news of Charles Correa's (the influential Indian architect who designed the Ismaili Centre in Toronto) passing. Designed around the principles of light with its iconic glass roofed prayer hall, Correa intended to reflect Canadian Ismaili identity by presenting elements of Islamic architecture in a modern architectural vocabulary. Alumni commented that spending a weekend in such an important building and setting for the community, contemplating the arts as an expression of cultural pluralism was indeed an inspiring and rejuvenating experience.