The first book published by The Institute of Ismaili Studies in Russian, Kratkaya istoriya isma‘ilizma, a translation of Farhad Daftary’s A Short History of the Ismailis, has been translated by Leila Dodikhudoevai and Lola Dodkhudoevai and edited by Oleg F. Akimushkin of the Institute of Oriental Studies in St Petersburg. Since the mid-1990s, more than 20 translations in six languages of ten Institute publications have been released. 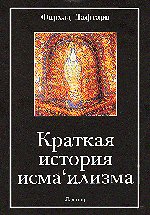 The translation of A Short History brings together the results of modern international scholarship for a Russian-speaking audience and provides a concise and readable overview of Ismaili history and doctrines within the broader contexts of Muslim history and Shi‘i thought. The work also includes accounts of the recent history of the Nizari Ismailis and developments in the Musta‘li-Tayyibi and Bohra communities.


The genesis of modern Ismaili Studies owes much to Russian-language scholars of the early decades of the twentieth century. Until that time, the history and doctrines of the Ismailis were available almost exclusively from the writings of those hostile to the community. As a result, myths circulated about the Ismailis for centuries and were accepted, even amongst Orientalist scholars, as realistic accounts of Ismaili teachings and practices.


A leading role was taken by the Russian scholar, I. Zarubin, and the Uzbek scholar, A. A. Semenov. During field research in Shugnan and other regions of Badakhshan in Central Asia, they realised that Ismaili communities had existed within the domains of the Russian Empire for many centuries. These scholars also discovered that the local Ismailis had preserved a significant part of the literary heritage of the Alamut and post-Alamut

periods of their history. In fact, A. A. Semenov was the first scholar to study the Tajik-speaking Ismailis of Badakhshan on the basis of their own manuscripts and traditions. In 1916, he acquired a collection of Ismaili manuscripts, written in Persian but of Central Asian origin, for the Asian Museum in St Petersburg. By the time of the October Revolution, the Ismaili collections that Semenov and Zarubin had assembled at the Museum were the most significant of the known collections of the period.


These collections attracted the attention of Vladimir Ivanow (1886 - 1970), another Russian pioneer of Ismaili Studies. Ivanow made significant contributions to many aspects of Ismaili studies, but in particular to the history and doctrines of the Nizaris

. It is mainly due to his initiatives and efforts, as well as the activities of a number of other Orientalists, Russian and others, that many original Ismaili texts were studied and published. This tradition of Russian scholarship continued with scholars such as A. E. Bertels and L. V. Stoeva.


It is this early research, based on manuscripts of the Ismaili communities in Badakhshan and India, which contributed to a dramatic transformation of Ismaili studies, leading to a more objective representation of Ismaili history and doctrines.


A Short History of the Ismailis was originally published in 1998 and is now available in Arabic, French, Persian, Tajik-Cyrillic and Russian in addition to the original English. Translations in Portuguese, German and Gujarati are in advanced stages of publication and will be available shortly.