Transforming the Sharing of Knowledge through Print and Digitisation 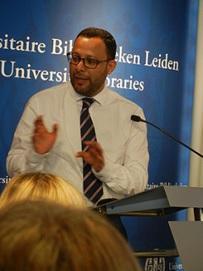 Dr Walid Ghali presented a paper entitled To print or not to print. Is that still the question? at the 38th Annual Conference of the Middle East Librarians Committee (MELCom), which was held at Leiden University in The Netherlands. The paper explored the various possibilities that led to the delay in the launch of the printing press during the Ottoman Empire and Egypt, and the implications of this decision on the transmission of knowledge. Dr Ghali also drew comparisons to modern times and discussed the reasons why some forms of reluctance still remain, as enormous collections of manuscripts are still not accessible due to the rejection of digitisation in some libraries across the world.

Looking back over five hundred years to the period when the revolution in information technology first occurred, Dr Ghali discussed how the transmission of knowledge was reformed when Johannes Gutenberg and others invented the moveable type printing press for the Roman alphabet. Regarded as one of the most important inventions of the second millennium, the arrival of movable type printing introduced an era of mass communication, which permanently altered the structure of society in Renaissance Europe. However, this was not a global movement and print only fully became established in the Islamic world in the nineteenth century, with the first Arabic book being printed in the year 1727 - more than two and a half centuries after the first Western book was published.

Commenting on the significance of this research, Dr Ghali said:

“This is an important area of research because it helps to have more understanding of the social, cultural and political history of the Middle East, and how it affected the reception of the printing press and other innovations. It also brings the discussion to the current situation regarding manuscript digitisation and the challenges that libraries in the Middle East are facing to make the valuable collections of the Islamic manuscripts available for wider communities. Once the IIS-ISMC Library creates its own digital collection of rare manuscripts, it will form a role model for other libraries and institutions. Collaboration between manuscript libraries is the key answer in this field.”

MELCom International is an academic organisation that is devoted to promoting co-operation amongst individuals and institutions globally, with a particular focus on all aspects of Middle East librarianship, book collecting and publishing. Its conferences and meetings provide scholars with a platform for the open exchange of ideas and experiences. MELCom and the Institute have an established relationship, the two organisations had also collaborated in 2014 when the IIS-ISMC Library hosted the annual UK meeting.

Further details on MELCom can be found here.