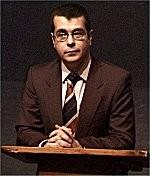 Dr El-Bizri’s talk formed part of a series at Eton College entitled ‘Ethics and Society,’ which examines a range of moral issues relating to society, the family, the environment, business and law. The series, now running for a number of years, has managed to introduce the students to ideas of both an ethical and philosophical nature, providing them with skills in analysis, argument and review.


Dr El-Bizri began his talk by urging those present to re-evaluate the role of religion in the contemporary world, even though its referential history to religious texts, commentaries, doctrines and established institutions and practices could be daunting. ‘We might be intellectually perplexed, vexed and overwhelmed by what imposes itself on us when attempting to talk about religion in our age,’ observed Dr El-Bizri, ‘we nonetheless cannot ignore…religion and its place in our lives…our current age challenges us to think about religion even if we live in a state of disorientation.’ Dr El-Bizri’s talk helped address some of the contemporary challenges facing Muslims in relation to modern political, social and religious thought. He framed his lecture by contextualising Islam within the shared ‘theological and historical horizons’ of the monotheistic Abrahamic religions and the common heritage of Western Europe and the Orient: ‘It is in this context that the encounter between the Arabic/Islamic legacy and its Occidental European counterpart, which to many of our contemporaries appears to be an encounter between strangers, is all along an encounter between two traditions that rest on shared intellectual grounds and emerge from shared conceptual origins,’ said El-Bizri.


He concluded his talk by restating that the continuing encounter between these worlds and worldviews must be seen in relation to larger ideals and values. He admitted that ‘in the face of an inherent universal injustice that announces itself, sometimes loudly and in most instances silently, concepts like “justice”, “goodness”, and “truth” may become unsuitable to depict the complexity of our human predicament.’ However, ‘as we are confronted with a global crisis, the enlightened quest for “justice” must be unconditionally restored.’ Previous sessions in this year’s series have been conducted by both Eton Masters as well as external presenters from the world of business, politics and law. In previous years, Professor Azim Nanji, Dr Alice C. Hunsberger and Dr Tobias Mayer have been invited to speak as part of the ‘Ethics and Society’ programme.


Eton College was founded in 1440 by King Henry VI. The College originally had 70 King’s Scholars or ‘Collegers’ who lived in the College and were educated free, and a number of ‘Oppidians’ who lived in the town of Eton and paid for their education. Today, it is a secondary school for approximately 1,280 boys, between the ages of 13 and 18, all of whom are boarders. Traditionally, the college has been affiliated with the Church of England but welcomes British and international students of all religious persuasions.