Early Shi‘i Thought: The Teachings of Imam Muhammad al-Baqir (I. B. Tauris in association with The Institute of Ismaili Studies) by Dr Arzina R. Lalani, was awarded one of Iran’s most prestigious literary awards, the Kitab Sal-e Vilayat, by the country’s Ministry of Culture. The prize, which is in its fourth year, is offered to the best publication, in any language, on the topic of love and devotion to the Shi‘i imams. 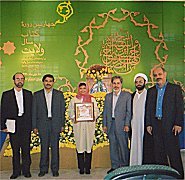 al-Baqir’s decisive role in the exposition of key Shi‘i doctrines, especially the nature of the Imamat

and the transmission of knowledge, together with the application of these doctrines in Muslim religious, theological, juridical and ethical domains. In this groundbreaking study, based mainly on primary sources, Dr Lalani asserts that by the end of his lifetime, Imam al-Baqir’s contribution had given the early Shi‘i community not only a scholarly context for the articulation of their view of Imamat, but also laid the foundation of a distinctive school of jurisprudence, the madhhab 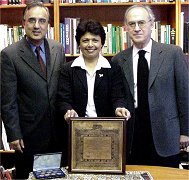 Travelling as a guest of the government of Iran, Dr Lalani was honoured at a ceremony on October 10, 2002, coinciding with the birthday of the Prophet’s grandson and Shi‘i Imam Husayn. As part of her award, Dr Lalani was presented with a collection of gold coins, an engraved plaque in Persian, a silk cloth from Yazd, several books and traditional Iranian sweets. She also accompanied the Minster of Culture and other officials from Tehran to Yazd, where she met Iranian scholars from across the country including Qum