After completing GPISH (2012), Aslisho went on to do a Master of Philosophy in Oriental Studies at the University of Oxford (2012-2014) with a dissertation on ‘The Living Imam

Aslisho was awarded the 2015 IIS Doctoral Scholarship to pursue a PhD in Asian and Middle Eastern Studies at the University of Cambridge. His thesis, provisionally entitled ‘The Organisation of Learning and Knowledge Transmission in Egypt and Ifrīqiyya under the Fāṯimids: Institutions, Patronage, Networks and Practices’ will explore the organisation and formalisation of learning practices and knowledge transmission in the pre-madrasa period (900-1100) in North Africa.

Previously, Aslisho worked as an Intern within the Shi’i Studies Unit. 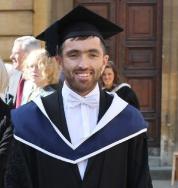