Ginans: A Tradition of Religious Poetry:

The ginans are a vast corpus consisting of several hundred (indeed, by some estimates over a thousand) hymns or religious lyrics which have for long been a central part of the religious life of the Indian Nizari Ismaili Community, and of which they continue to form the living religious tradition. The literature is also shared by the Imamshahi community in Gujarat, who are believed to have split off from the Ismailis sometime in the 16th century.

’ is believed to derive from the Sanskrit jnan, an abstract noun, which may be variously rendered as ‘knowledge’, ‘wisdom’ or ‘cognition’ (reminiscent, to some extent, of the Greek gnosis).

The language of the ginans is fascinatingly mixed. Its vocabulary is derived alike from Sanskrit, and languages descended f rom Sanskrit (chiefly Gujarati) on one hand, and Arabic and Persian on the other. Few ginans, if any, can be distinguished by content. What rather gives each its unity, its identity, is the melody (raga) assigned to it. Furthermore, the last verse of every ginan mentions, without fail, the name of its accepted author. It is these features which make every single composition, whose content is normally quite heterogeneous, recognisably distinct.

The Pirs and Ginans

Indian Ismaili tradition attributes the origin of this poetry to several charismatic figures or Pirs. It is the unanimous opinion of scholars that the ginans were first transmitted as oral tradition. It is not known whether at least some manuscripts may have existed simultaneously — the earliest copy identified so far is dated 1736. The manuscripts were all written in a special script, Khojki, which was known only to members of the community.

Around the turn of the last century, a large number of manuscripts from areas as far apart as Kathiawad, Kutch, Sind

, Punjab, Gwadar and Muscat were assembled in Bombay. An Ismaili individual called Mukhi Lalji Devraj seems to have been officially entrusted to collate, edit and publish the content of the hundreds of manuscripts gathered by him. This he accomplished through his single-handed efforts over more than a decade. They were initially all published in Khojki

, for dissemination within the Khoja community. A common practice was to publish the long works in separate or combined volumes and the shorter ones, in groups of 100 hymns each, labelled simply So Ginan: ‘A Hundred Ginans’. Soon thereafter, the texts were also published in Gujarati script, usually in volumes now separated according to authorship. 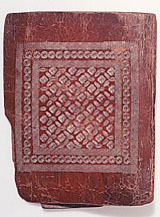 The Institute’s collection of manuscripts in Gujarati and the Khojki script comprises over 200 volumes, and is the most significant corpus of original textual sources located anywhere in the world. The manuscripts exhibit 2 basic styles of binding: a traditional local style in the manner of Indian pothas and a foreign Western style influenced by 19th century European book-binding practices.

Extracted and Compiled from A Scent of Sandalwood: Indo-Ismaili Religious Lyrics by Aziz Esmail (London: Curzon in association with The Institute of Ismaili Studies, 2002).