The Qur’an and Its Interpretations

Previous Pause Next
1 of 3 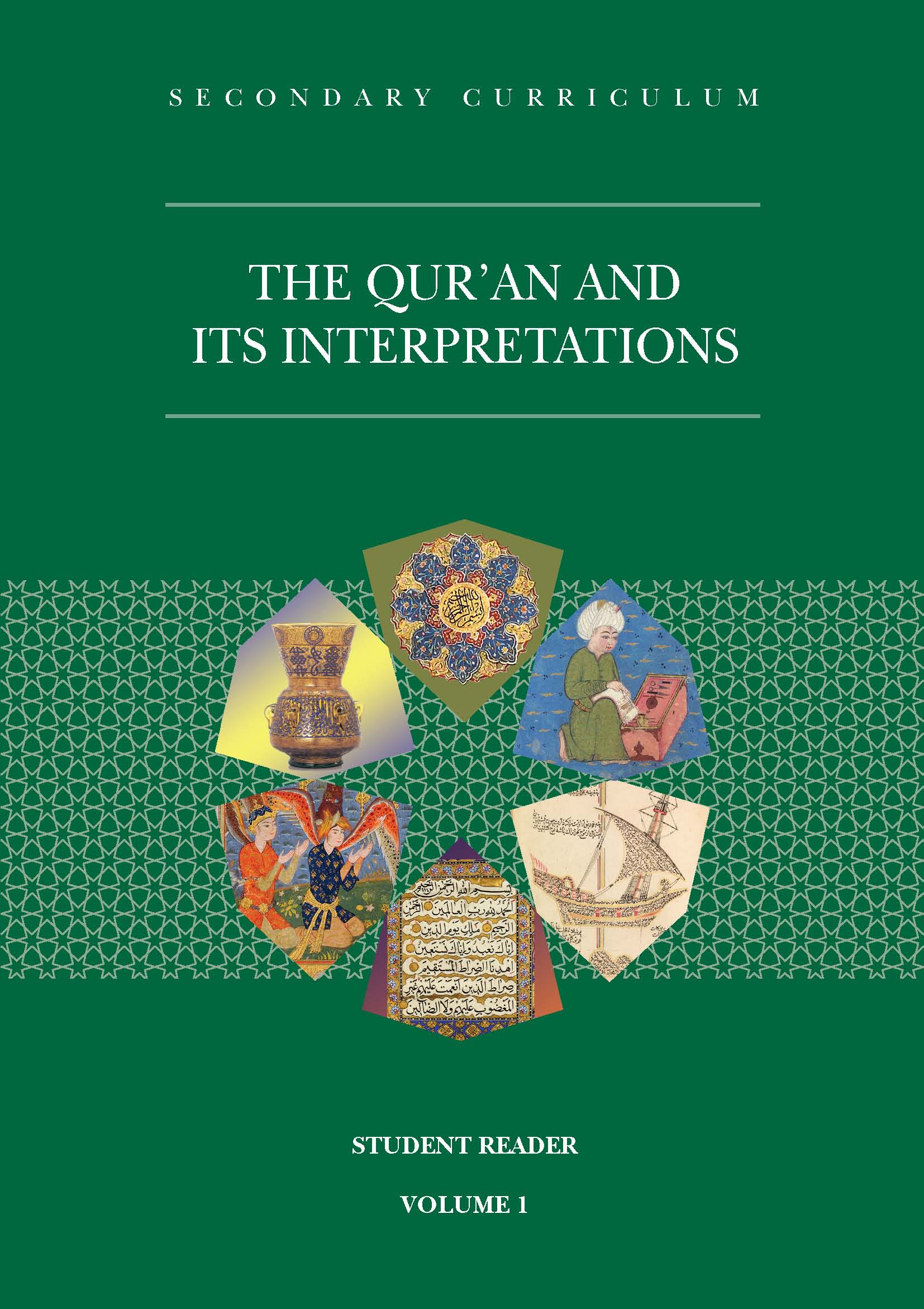 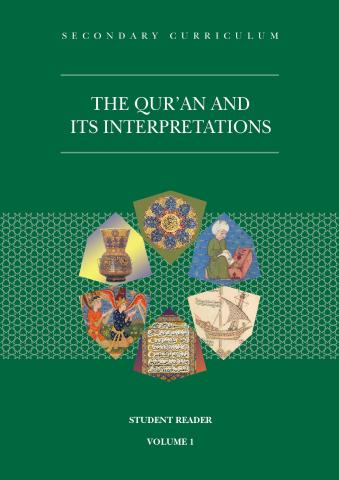 Introductory pages of Qur'an and Its Interpretations Student Reader 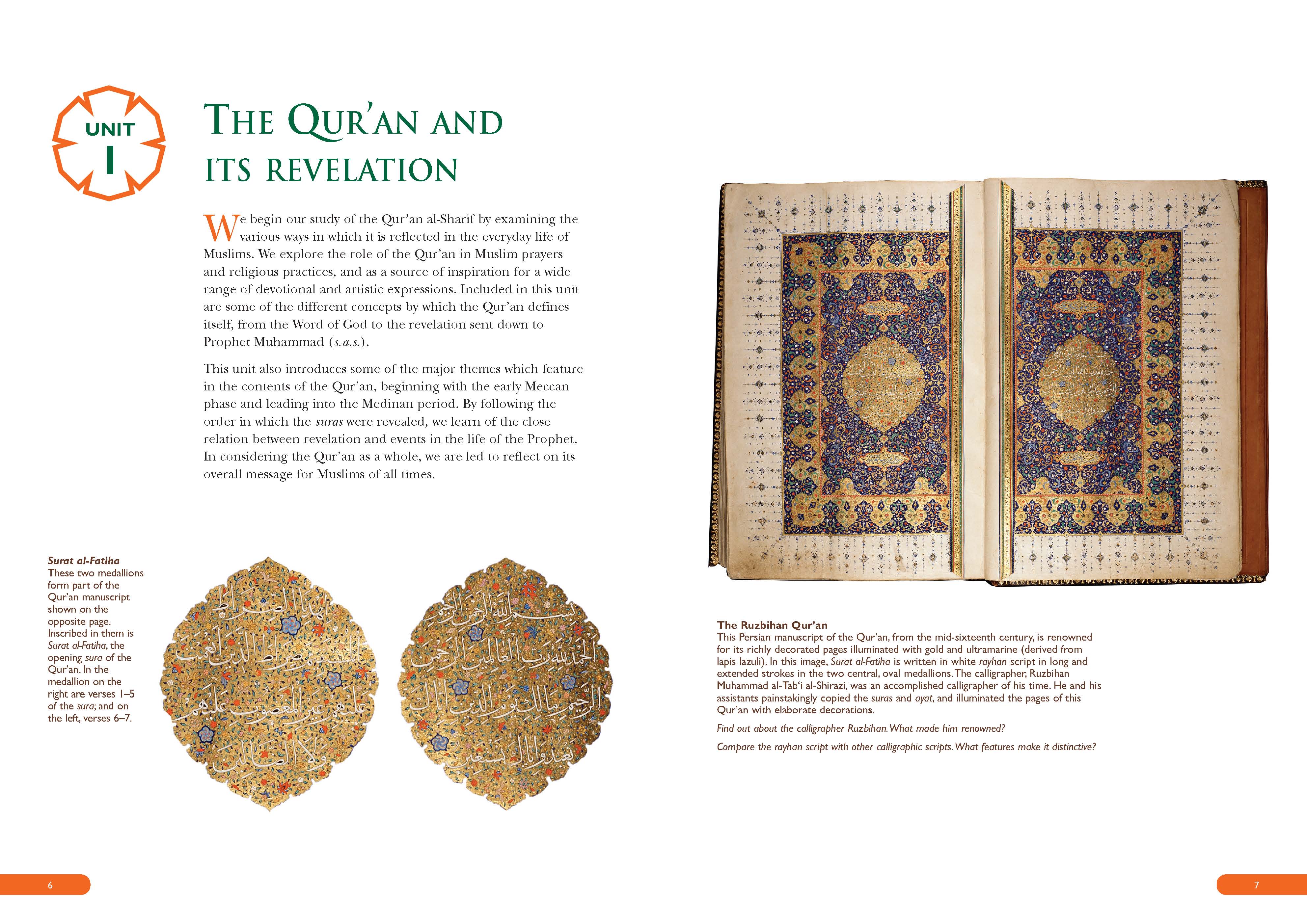 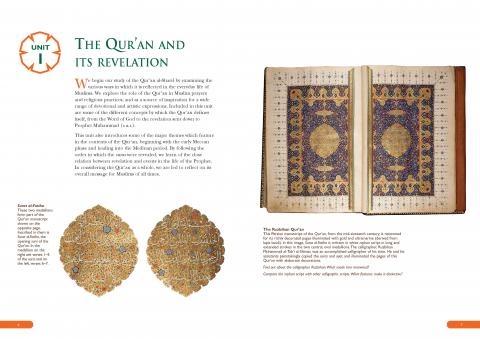 Discussion on Al-Fatiha, the Opening chapter of the Qur'an in the Student Reader 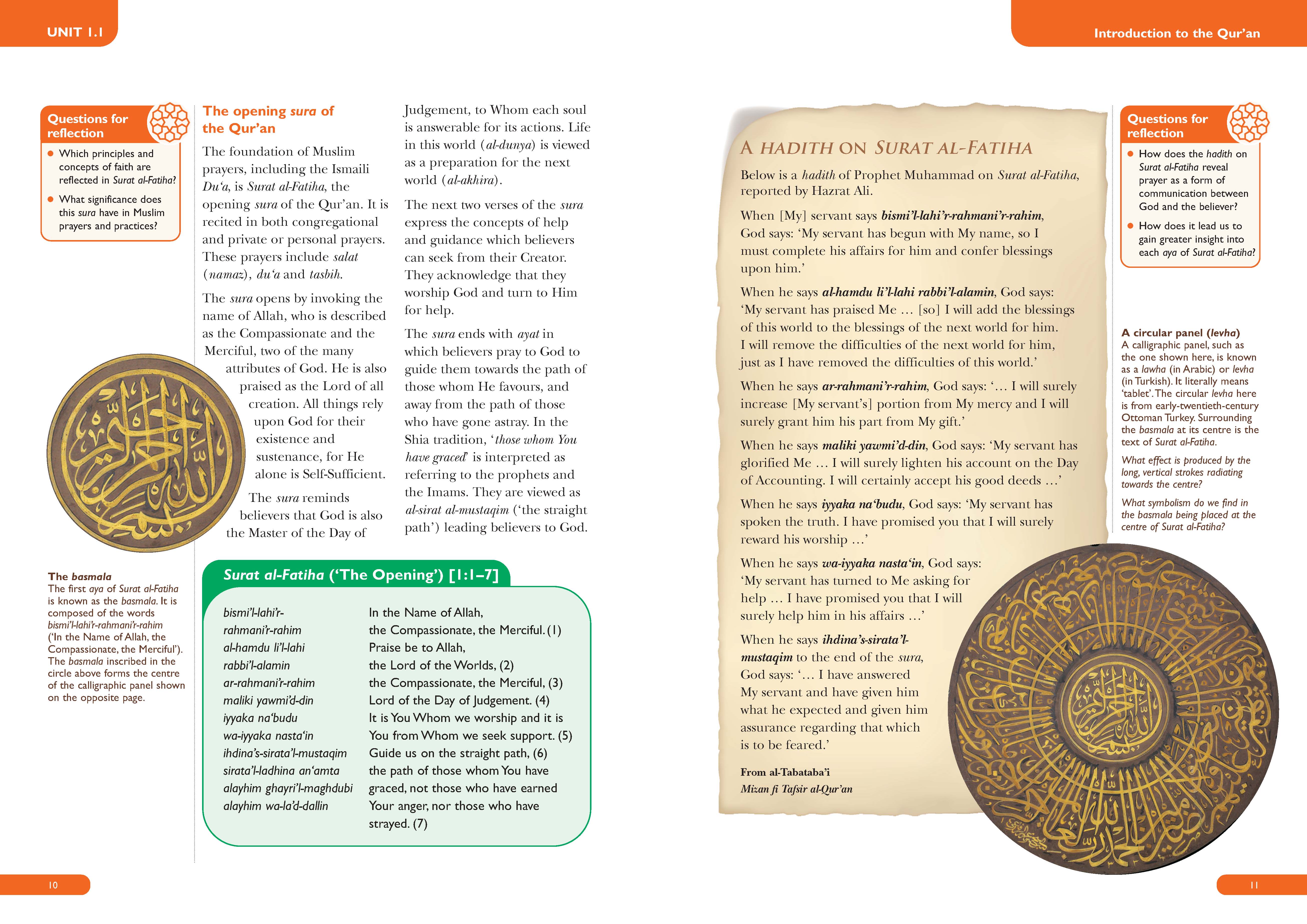 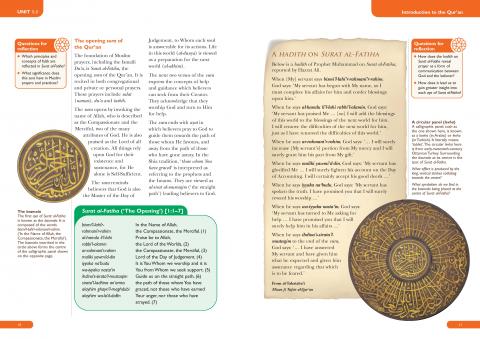 In the contemporary context, the Qur’an

continues to act as an abiding source of inspiration and guidance for Muslims. As in the past, it is also the subject of wide-ranging discussions among Muslims on how it is to be understood and applied in the context of current times. The new Secondary Curriculum module aims to equip STEP teachers and students with tools of studying the Qur’an which will give them insight into its diverse interpretations in Islamic traditions, including Shia

The Qur’an and Its Interpretations engages students in a study of selected facets of the Qur’an, beginning with its revelation in the seventh century, and leading into its diverse interpretations and expressions in Muslim history. The contents of the Qur’an are presented at an introductory level from historical and contextual perspectives. Among the themes and concepts examined are revelation, authority and guidance; faith, ethics and social justice; and creation, spiritual quest, and the hereafter.

The module also considers various positions on the Qur’an as a source of guidance which emerged in Islamic traditions, based on different understandings of authority. This aspect is examined in greater detail in the context of Shia Islam and the principle of Imamat

. A central feature of the module is the diversity of understandings of the Qur’an which have developed over historical periods and across various cultures, from theological, juridical and mystical readings to literary and aesthetic renderings.

This first of the two volumes commences with a chronological examination of selected Qur’anic passages linked to the Meccan and Medinan contexts. It leads into a discussion of different views on the compilation of the Qur’an into a written text, and its use as a source of guidance in relation to different notions of authority which emerged in early Muslim history. Also explored in this volume is the development of the study of the Qur’an through disciplines and methods which evolved over time, including the application of tafsir and ta’wil

to its contents. The final part of the volume is devoted to the concepts of authority and guidance in the Qur’an, as reflected in the accounts of the prophets, and in passages interpreted by Shia Muslims, as related to the principle of Imamat.

UNIT 1: THE QUR’AN AND ITS REVELATION

by examining the various ways in which it is reflected in the everyday life of Muslims. It explores the role of the Qur’an in Muslim prayers and religious practices, and as a source of inspiration for a wide range of devotional and artistic expressions. Included in this unit are some of the different concepts by which the Qur’an defines itself, from the Word of God to the revelation sent down to Prophet Muhammad (peace be upon him).

This unit also introduces some of the major themes which feature in the contents of the Qur’an, beginning with the early Meccan phase and leading into the Medinan period. By following the order in which the suras were revealed, readers can learn about the close relation between revelation and the events in the Prophet’s life. In considering the Qur’an as a whole, they are led to reflect on its overall message for Muslims of all times.

UNIT 2: THE QUR’AN AS KITAB, AND ITS INTERPRETATION

The second unit examines how the revelations sent to Prophet Muhammad (peace be upon him) were compiled into a written form. Based on historical sources, the unit compares different views on the collection of the revelations in the time of the first caliphs.

Included in this unit is an exploration of the various disciplines which developed historically to aid the study and interpretation of the Qur’an. Students are introduced to the genre of tafsir (Qur’anic commentary) and led to appreciate the various types of tafsirs produced over time. The unit concludes by exploring Shia Ismaili concepts of ta’wil as applied to revelation.

The third unit examines some key themes reflected in the Qur’an al-Sharif related to divine guidance, prophecy and authority. The concepts of prophecy and revelation in the Qur’an are linked closely to the principle of authority. According to the Qur’an, the prophets and messengers of God were granted divine authority to guide their people. This authority was transmitted through the line of prophets, who were sent to each people. In the Qur’an, we find verses on God’s guidance to the prophets continuing through their families and descendants. The chain of prophethood culminates with Prophet Muhammad (peace be upon him) as the last and final Prophet and Messenger of God.

This unit concludes with an examination of the Shia interpretation of the Qur’anic concept of authority, and its relation to the continuity of divine guidance through the principle of Imamat.