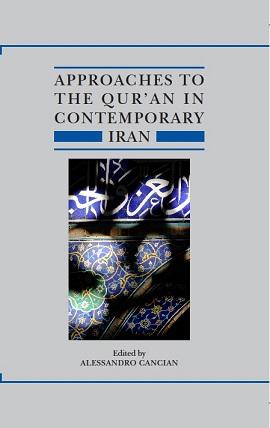 since early classical times, and this has been visible in various forms from their poetry, calligraphy to Qur’anic exegesis. During the nineteenth and twentieth centuries, technological advancements made it easier to disseminate information to a larger pool of intellectuals who occupied the middle ground between the traditional learned clerics and a nascent civil society. These intellectuals were able to create accessible discourses which helped to facilitate deeper conversations and enhanced engagement in even more arenas.

Approaches to the Qur’an in Contemporary Iran by Dr Alessandro Cancian, explores the importance of the Qur’an in the religious, intellectual, political and artistic discourses in modern and contemporary Iran, from the nineteenth century to the present. The publication was developed as a result of the Qur’anic Studies Colloquium held at the IIS in September 2013 and discussions at the Ninth Biennial Iranian Studies Conference in Istanbul in August 2012.

Touching upon different aspects of the impact, understanding and use of the Qur’an, the seventeen chapters included in this volume have been written by some of the most authoritative specialists in the modern history of Iran. Their contributions span a wide range of subjects and themes, covering varied ground from, the examination of the trends in Qur’anic exegesis that are currently prominent in Iran; Sufi mystical interpretations of the Qur’an; the concept of revelation as the basis of diverse political trends; approaches to ritual prayer by women in Iran; the use of Qur’anic themes in contemporary Iranian cinema; the Qur’an as a living scripture in specific intellectual and social circles, and case studies of individual intellectuals.

Reader in Islamic Studies at the University of Glasgow, Dr Lloyd Ridgeon, reviewed the book and commented:

“This essential work, composed of chapters authored by some of the world’s leading academics in Islamic and Iranian studies, provides a comprehensive analysis of how the Qur’an is received in modern Iran. The collection’s range of topics has been carefully considered, shedding light on modern hermeneutical problems, mystical ways of perceiving the sacred text, and its significance in modern cultural forms including cinema and music, among others. The chapters have been researched with meticulous care to detail. Approaches to the Qur’an in Contemporary Iran looks set to become a classic work.”

Approaches to the Qur’an in Contemporary Iran provides readers with two centuries of reflection on revelation and scripture in the Persian speaking world. The collection will provide academics working in the fields of intellectual and religious history of modern Iran and Qur’anic Studies with a comprehensive overview of the richness and plurality of Iran’s engagement with the Qur’an. It achieves this by bringing together different approaches from theology, mysticism, exegesis, reformism, cinema, music, and visual and popular culture.

To learn more or to read Dr Alessandro Cancian’s introduction to the book, visit the publications content.

Kinship, Camaraderie and Contestation Fatimid Relations with the Ashraf in the Fourth AH /Tenth CE century
Ethics in Action: The Role of Waqf in Early Muslim Society
Tenth book published in the Institute’s Qur’anic Studies Series