Class of 2008 Visits Museums in Oxford 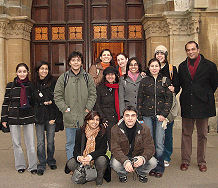 At the Ashmolean Museum, which was established in 1683 and is Britain’s oldest public museum of art and archaeology, students attended a gallery talk by Dr Ruth Barnes on the exhibition, Pilgrimage: The Sacred Journey. This exhibition was installed by the Ashmolean Inter-Faith Exhibition Service (AIFES) and it examines the commonalities and differences of the pilgrimage phenomenon in the world’s faith traditions, including the Abrahamic traditions of Islam, Judaism and Christianity, as well as Hinduism, Sikhism, Buddhism and Jainism. Students were encouraged to think critically on how the pilgrimage traditions of Muslims and other faiths were exhibited, and to consider issues of how museums might re-present such religious experiences.

Students also toured the Pitt Rivers Museum, which was established in 1884 and is one of the world’s first ethnographic museums.They had an opportunity to view the museum’s diverse collection of archaeological and ethnographic objects from around the world, and to view the recently installed exhibition, Wilfred Thesiger’s Iraq, 1949 - 1958: Photographs of Travel. As part of this visit, students were asked to consider the complex histories of ‘every-day’ objects and the manner in which human societies have developed such a diversity of solutions to a range of common concerns and problems.