In Conversation with IIS Alumni: Dr Arif A. Jamal 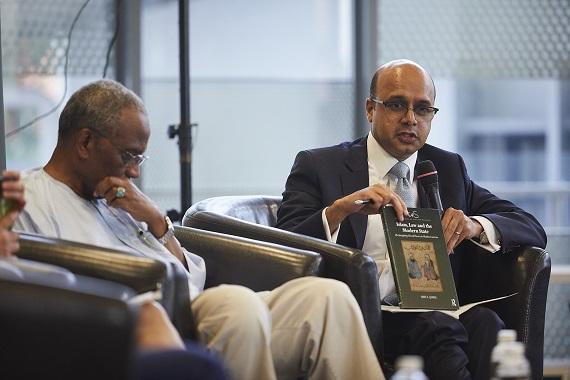 Alumni are our ambassadors, representing the values, principles and work of the IIS in their chosen fields; whether it be academia, development, law, arts and culture to name a few. In this new series of “In Conversation with IIS Alumni” we catch up with individual alumni to find out more about their current work and their journey to this point.

A. Jamal - who has been an Associate Professor at the National University of Singapore (NUS) since 2010 - and learnt more about his recent publications and his contributions to the field of international law.

His research and teaching interests include, law and religion, law in Muslim contexts, and legal and political theory. He is the author of Islam, Law and the Modern State (Routledge, 2018), co-editor of Regulating Religion in Asia: Norms, Modes, and Challenges (Cambridge, 2019) and his articles have appeared, or are forthcoming in, amongst others, the Oxford Journal of Law and Religion (Oxford); American Journal of Comparative Law (Oxford); the Journal of Law, Religion and State (Brill) and the Asian Journal of Comparative Law (Cambridge).

[AL] Congratulations on your recent publication, Islam, Law and the Modern State: (Re)imagining Liberal Theory In Muslim Contexts? Can you tell us about the main themes which appear in the book?

[AJ] Within the global phenomenon of the (re)emergence of religion into issues of public debate, one of the most salient issues confronting contemporary Muslim societies is how to relate the legal and political heritage that developed in pre-modern Islamic polities to the political order of the modern states in which Muslims now live. This work seeks to develop a framework for addressing this issue.

The central argument is that liberal theory, and in particular justice as discourse, can be normatively useful in Muslim contexts for relating religion, law and state. Just as Muslim contexts have developed historically, and continue to develop today, the same is the case with the requisites of liberal theory, and this may allow for liberal choices to be made in a manner that is not a renunciation of Muslim heritage.

[AL] What was the impetus for writing this book; what messages did you wish to communicate?

[AJ] This book emerged from my PhD thesis. It was born out of a reflection on the question of how contemporary Muslim communities might conceptualise the interaction of religion, law and the state. In particular, it was motivated by a concern that Muslim communities were being offered unpalatable choices between dogmatic religion or the rejection of religion. As an alternative, the book develops the idea of ‘justice as discourse’ which proposes that religiously inspired language be given a wide space in public political debate, and allowed to be influential upon but never solely decisive of policy. In so doing, it recognises that the language and culture of ‘Islam’ has been a salient trope in Muslim contexts but at the same time that the Shari‘a

is not something that can be invoked in a simplistic manner, especially for the modern state.

[AL] You’ve also recently edited a new publication Regulating Religion in Asia. Given the complex relationship between law and religion, how have these ideas been presented in this publication?

[AJ] In recent years, law and religion scholarship has increasingly emphasised the need to study the interaction of legal and religious ideas and institutions, norms and practices. The overall question that this scholarship explores may be stated as follows: how do legal and religious ideas and institutions, methods and mechanisms, beliefs and believers influence each other, for better and for worse, in the past, present and future? This volume engages this area of scholarship by examining how law regulates religion, and how religion responds to such regulations. It examines underlying norms influencing state regulation of religion, and challenges emerging from such regulation. Importantly, this volume goes beyond the conventional enquiries that draw upon the Anglo-European approaches and experiences, and emphasise instead Asian perspectives in order to expand and build upon existing understandings about the complex relationship between law and religion.

[AL] Do you have any forthcoming publications planned or any specific areas of research that you are currently working on?

[AJ] I recently co-wrote an article with Jaclyn Neo in the Journal of Law, Religion and State, entitled, “Religious Pluralism and the Challenge for Secularism” which discusses how changing religious demographics and heightened religious plurality are challenging existing thinking about, and patterns of, state-religion relations and the nature of the ‘secular state’. One forthcoming piece is an article entitled “Authority and Plurality in Muslim Legal Traditions: the Case of Ismaili Law.” This article is due to be published in the American Journal of Comparative Law in the later part of 2019. In addition, I am currently co-editing (with Silvio Ferrari, Mark Hill QC, and Rossella Bottoni) the Routledge Handbook of Freedom of Religion (Routledge, forthcoming 2020). The Handbook brings together a range of authors drawn from different disciplines, to discuss various dimensions of freedom of religion. The planned sections include discussions of historical dimensions of freedom of religion and belief, theological perspectives on freedom of religion from different religious traditions, the geopolitics of freedom of religion, and mapping the right to freedom of religion.

[AL] Many thanks Arif. The IIS is proud of your accomplishments, particularly in such a worthwhile field, and we wish you all the very best in your future endeavours.

Dispersed across more than 30 countries, the IIS Alumni Association has over 600 members. The relationship between the IIS and its graduates is crucial to the enhancement of IIS’s vision and supports the growth and development of its individual graduates. His Highness the Aga Khan

had referred to this in his speech at the IIS’s 25th Anniversary Graduation Ceremony, where he said, “I believe that your continuing relationship and dialogue with the Institute will enrich your role as potential agents of change, while also extending to the Institute the benefits of your experiences and insights. This partnership can ensure that you are well placed to contribute to the development and growth of future generations of our intelligentsia, so that we strengthen our own capacity to determine our destiny.”