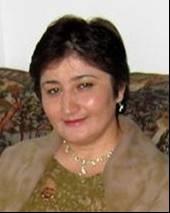 Dr Fahmida Suleman is currently a Research Associate in the Department of Academic Research and Publications and the Administrative Co-ordinator of the Qur’anic Studies Project.

Fahmida obtained a BA in Islamic & Religious Studies from the University of Toronto in 1994. In 1997, she graduated from the Institute’s Graduate Programme in Islamic Studies and Humanities, which was completed by reading for her M.St in Islamic Art & Archaeology at the University of Oxford. She is a recipient of the IIS Ph D scholarship in 1998, and is involved in a number of research programmes and publications at the IIS.

From a religious studies background and having additionally carried out curatorial internships at both the British Museum and the IIS, Fahmida became increasingly drawn towards the area of Fatimid art:

“This was an area where I could engage with Arabic sources that were related to Ismaili history. I wanted people to understand that this type of art can be used as a historical document, which is a useful source of both social and cultural history of the Mediterranean world.”


“The Ph D Scholarship programme at the IIS is second to none. I found that the senior academics were extremely encouraging, who offered me invaluable support and provided a forum where I could discuss my progress. It’s something definitely worth doing.”

In 2003 Dr Suleman received a Postdoctoral Fellowship in Qur’anic Studies with the IIS. During her fellowship, she organised an international colloquium, “Word of God, Art of Man: The Qur’an and its Creative Expressions” which coincided with the IIS’ 25th Anniversary. She is currently editing a volume of selected proceedings of the colloquium, which is expected to be published in due course.

Her other publications include: “From Shards to Bards: Pottery Making in Historic Cairo” in, Living with the Past: Historic Cairo (F. Daftary, E. F. Fernea and A. Nanji, eds., Texas: University of Texas Press in association with The Institute of Ismaili Studies, forthcoming 2005); “Ceramics”, “Gifts and Gift Giving”, “Kalila wa Dimna” in, Medieval Islamic Civilization: An Encyclopaedia (Josef Meri, ed., New York: Routledge, forthcoming 2006); and Reflections of the Fatimids