European Tour of “Expressions of the Pamir”

“Expressions of the Pamir” includes a performance by 25 professional artistes of music, song and dance reflecting traditions of mountain peoples of Central Asia presented for the first time ever in Europe. It also includes an exhibition of artefacts highlighting various aspects of the region’s material culture ranging from art, textiles, costumes, photographs and even a traditional yurt (tent). 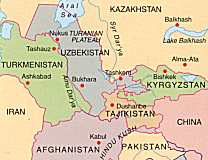 “Events of recent months have provoked a genuine interest in Islam,” said Professor Azim Nanji, Director of The Institute of Ismaili Studies which has sponsored the European tour, “yet there is still considerable misunderstanding of its diverse cultures and traditions. ‘Expressions of the Pamir’ provides a glimpse into the rich heritage of music, dance, song and art of Central Asia, but also into the multi-dimensionality of Muslim societies and cultures.”

The exhibition and performances draw on the traditions of Badakhshan which are shared across North-eastern Afghanistan, Eastern Tajikistan, Western China and Northern Pakistan. The Pamir Mountains have seen momentous events in the history of Central Asia.
Even before Alexander the Great invaded the area, the region was the crossroads of diverse civilisations. Mountain societies living in the region, through which the Silk Route runs, have sustained a rich legacy of art and culture that draws on those civilisations.
Portugal

The First Lady, Maria Jose Ritta, and the Minister of Culture, Dr Pedro Roseta, were amongst the distinguished guests who joined Her Highness Begum Inaara Aga Khan at a concert and exhibition from Tajikistan at the Ismaili Centre, Lisbon on June 4, 2002. Commenting on “the beauty and strength of the Pamiri music and dances,” Culture Minister Pedro Roseta said “we are building the new Portugal in plurality and diversity.” “The Portuguese,” he said, “are open to the world,” recalling that “fortunately, history enabled us to be the people who promoted the encounter among men and civilisations. The earliest ‘globalisation’ was effected by us and, therefore, we have an additional responsibility to promote this spirit of mutual interchange and sharing of knowledge.”

Describing one of the sources of inspiration for the long intellectual tradition that characterises the cultural expressions of people of this region, Mr Nazir Din

, President of the Ismaili Council for Portugal said “enlightened societies are tolerant, have their vitality based on diversity and protect the weak and the poor. A thousand years ago, the Ismaili philosopher-poet Nasir-i-Khusraw found in the Pamir mountains a society that was open to new ideas and that has, over the years, despite repression, developed a mutual understanding and respect for different traditions of their own faith and for the faith of others."