Exhibition in honour of the late Wladimir A. Ivanow in St. Petersburg marks a new phase of progress in Ismaili studies 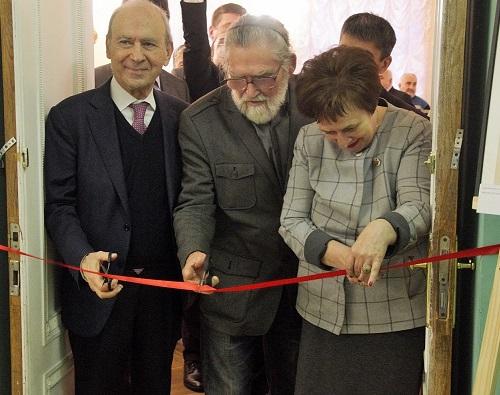 To mark the advancement of Ismaili studies in the Russian Federation, an exhibition in memory of the great Russian scholar of modern Ismaili studies, Wladimir A. Ivanow, was held in St. Petersburg, Russia, on 11 October 2019. Dr Farhad Daftary, Co-Director of IIS; Dr Stanislav Prozorov, Head of the Academic Activities at Institute of Oriental Manuscripts, and Alla Dydymova, Advisor to the Director of the House of Nationalities in St. Petersburg, formally inaugurated the exhibition.

The exhibition showcased the outstanding journey of Ivanow’s pursuit for knowledge and his exploration of people of the East, particularly their cultures, religions, architecture, and the advent of modernisation in traditional societies. Through his scholarship, Ivanow eloquently captured these developments, and strongly emphasised the value of Russian scholars studying the Muslim heritage of their Eastern nations.

The exhibition was a visual representation consisting of around 70 images with English and Russian captions that illustrated the life, travels and works of the Russian orientalist. The display included photographs of scholars from diverse backgrounds who influenced Ivanow’s own intellectual development; the places he visited; the sites he studied, and his own handwritten notes in Russian and Persian. The exhibition also presented images of the Aga Khans – as it was the Ismaili Imam

III), who commissioned Ivanow in 1931 to study the Ismailis on the basis of their own literary heritage.

Representatives from other partner institutions highlighted the importance of celebrating Ivanow’s life and work. In her opening remarks, the Advisor to the Director of the House of Nationalities in St. Petersburg, Alla Dydymova, commented:

“Celebrating the life of the Russian orientalist in the House of Nationalities is timely and remarkable because St. Petersburg is home to various cultures and traditions and the merger of these cultures presents us with an enormous bouquet which we are proud to have in St. Petersburg.”

Andrey Frolov, Member of the Committee on Interethnic Relations and the Implementation of Migration Policy of St. Petersburg remarked:

“The atmosphere in St. Petersburg helped to create a scientific milieu which gave rise to many great scholars, such as Wladimir Ivanow. But now there is a reverse process, where the network of academic institutions, such as the Institute of Oriental Manuscripts are helping St. Petersburg to create dialogue and establish relations with external institutions and harmonise interethnic and inter-confessional relations in new conditions when people from different countries, including Central Asia choose St. Petersburg as their second home”.

Dr Stanislav Prozorov, Head of the Academic Activities at Institute of Oriental Manuscripts began his comments by thanking Dr Farhad Daftary, Co-Director of the IIS, and Dr Hakim Elnazarov, Coordinator of the Central Asian Studies Unit at the IIS for “their reverent and respectful attitude towards the spiritual and cultural heritage of the Russian orientalists.” He further added:

“The Asiatic Museum which was a predecessor of the Institute of Oriental Manuscripts was established by the Imperial Russian Academy of Sciences to collect, study and propagate the culture and traditions of the people of the East. From the very beginning Russian academia carefully and attentively treated and studied anything which was related to the East. One of the founders of this tradition was Wladimir Alekseevich Ivanow.”

“Despite his 50 years abroad, Ivanow always remembered his homeland, maintained relations with Russian scholars, wrote his memoirs in Russian and wanted them to be published in Russia. His wish has finally been realised.”

Among other speakers, Davlat Khudonazarov, a renowned cinematographer, public figure and historian, spoke of the origins of the Ismaili Imamat

’s relations with Russia, which date back to the early 20th century. He spoke about Imam Sultan Mohamed Shah

’s visit to Russia in 1911, his appreciation and patronage of Russian culture and his close relations with Russian artists and the Russian royal family.

The exhibition has received interest from various audiences, from the academic community who are specialists in history or Islamic studies to young Ismaili students studying the IIS primary and secondary curriculum, who came with their parents and teachers to learn about Ivanow and his contributions to Ismaili studies.

Organised by The Institute of Ismaili Studies, the Institute of Oriental Manuscripts, the Regional Public Organisation ‘Representatives of the Pamir Diaspora’ and the House of Nationalities in St. Petersburg - this partnership demonstrates the importance and the progress of Nizari Ismaili studies.