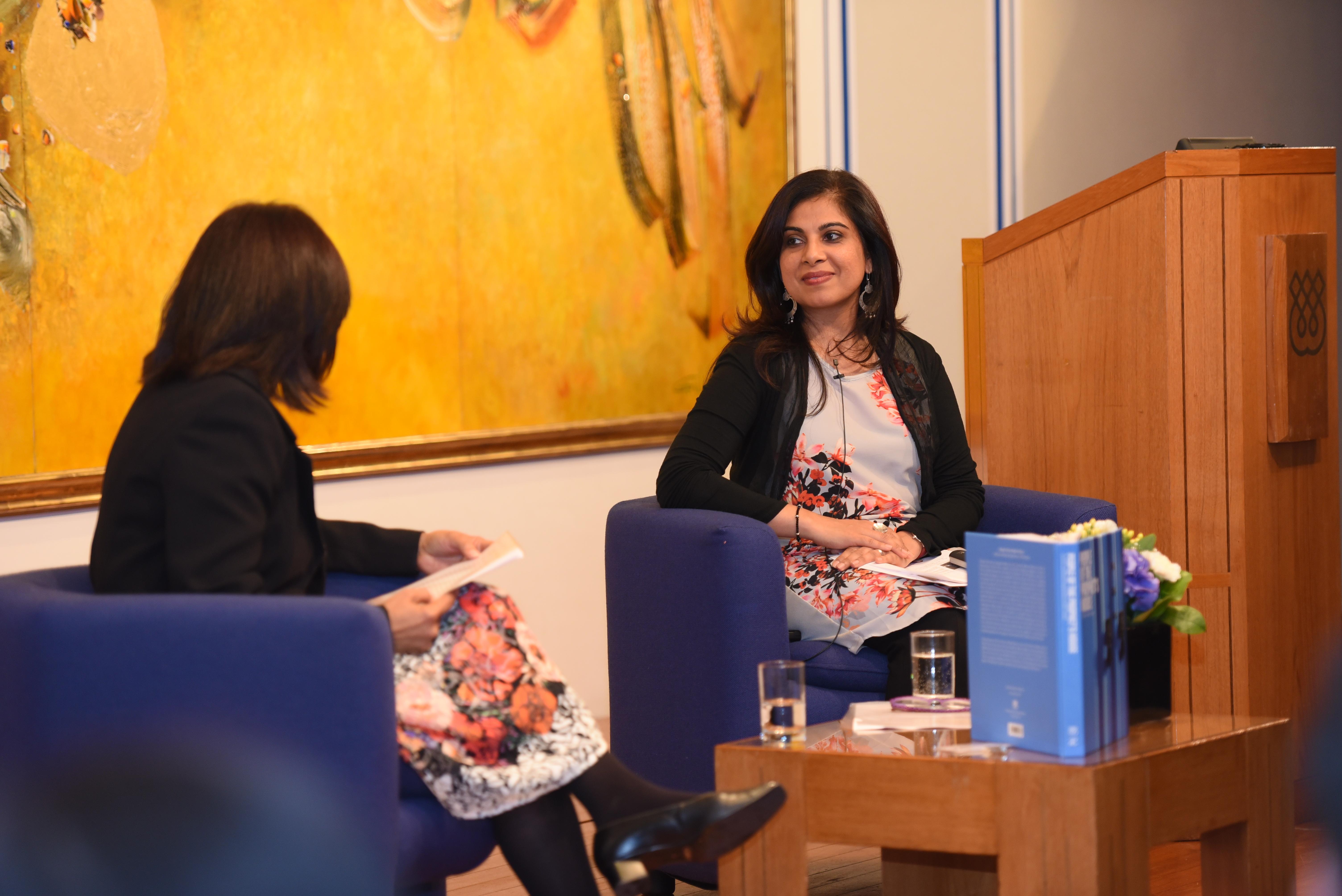 The IIS is pleased to announce the publication of People of the Prophet’s House: Artistic and Ritual Expressions of Shi‘i Islam, edited by Dr Fahmida Suleman. The book contains twenty-two essays, which are richly illustrated with over 200 colour pictures, maps and charts. The essays were originally read at a conference held at the British Museum in 2009 as part of the Museum’s programme for its major exhibition, Shah ‘Abbas: The Remaking of Iran. These conference papers and newly commissioned essays have been published in a revised, expanded and fully illustrated format by Azimuth Editions in association with the IIS, and in collaboration with the British Museum’s Department of the Middle East.

To launch the book, on Friday 2 October, the IIS hosted an engaging on-stage conversation between Dr Fahmida Suleman and Dr Shainool Jiwa, co-authors of the introduction to the book, which was followed by a discussion with the audience. Dr Suleman explained in her illustrated presentation, that the aim of the work is to contribute to a growing body of scholarship dedicated to the religious arts and rituals of Shi‘i Muslims from around the world, with contributions from experts covering a wide range of topics including, pilgrimage to holy sites, Shi‘i Muharram

The book focuses on the global diversity of the artistic and devotional expressions of Shi‘i Muslims from places and cultures as far apart as Trinidad and China, and demonstrates how these are united by a number of core beliefs – among which is an allegiance to and love for Prophet Muhammad and members of his family (i.e., his Ahl al-bayt

, ‘People of the House’). The book explores how this essential principle of belief has directly impacted how Shi‘i artists, rulers, patrons and ritual participants have conveyed their love and loyalty through material culture and religious ritual.

During her presentation Dr Suleman said:

“One of the conclusions of the book is that reverence for the Ahl al-bayt transcends Sunni-Shi‘i demarcations. This is a universal belief in Islam and not restricted to any particular community, tariqah

or time period in history.”

, and the granddaughter of Prophet Muhammad - who is considered the patron saint of the city. Muslim pilgrims of various persuasions pay regular visits to her shrine, especially during her mawlid (birthday) celebrations, to express their love and reverence for a member of the Ahl al-bayt.

The book aims to provide readers with a better understanding of the diversity of Shi‘i beliefs and practices through the lenses of art, material culture and ritual, from both historical and contemporary contexts. The essays in the volume also illustrate how Muslim artistic and ritual expressions of love for and devotion to the Prophet and his Ahl al-bayt transcend religious boundaries and demarcations.

The book launch was accompanied by an exhibition of rare manuscripts from the IIS’s Special Collections Unit. Some of the items displayed included: a copy of a Kashmiri Qur’an

with marginal translations and commentaries in Persian, transcribed in 1298/1881 by Shaykh

Ahmad b. Shaykh Muhammad of Rashnahar, Kashmir; a copy of the Nahj al-balagha

(Peak of Eloquence) – the most famous collection of sermons, letters, tafsirs and narrations attributed to Imam

‘Ali, which were collected by the tenth-century Shi‘i scholar al-Sharif

(Lights to Illuminate the Proof of the Imamate

al-Kirmani; and Fasl dar bayani shinakhti Imam-i zaman (A chapter on the recognition of the Imam), a manuscript by the 16th-century Ismaili da‘i Muhammad Rida b. Sultan Husayn-i Ghuriyani (d. after 960 AH/1553 CE) better known as Khayrkhwah-i Harati.

Dr Fahmida Suleman (DPhil, Oxford) is a graduate of the IIS and currently Phyllis Bishop Curator for the Modern Middle East at the British Museum. Her research interests include religious arts and iconography, material culture from the Fatimid period, and Middle Eastern and Central Asian textiles and jewellery.

Kinship, Camaraderie and Contestation Fatimid Relations with the Ashraf in the Fourth AH /Tenth CE century
People of the Prophet's House
Tenth book published in the Institute’s Qur’anic Studies Series