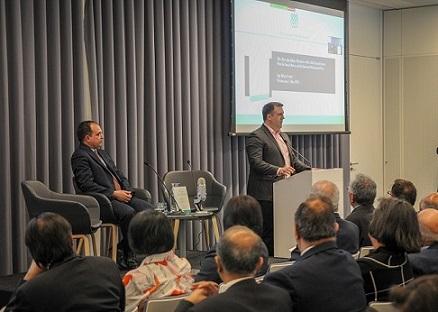 While the Fatimid and Alamut

periods have received considerable scholarly attention and are more widely written about, the Nizari Ismaili history of the 19th century has had much less coverage. Shedding light on this understudied, yet significant period in Ismaili history, the joint Editors of The First Aga Khan: Memoirs of the 46th Ismaili Imam, Dr Daniel Beben and Dr Daryoush Mohammad Poor, gave insightful presentations and discussed the remarkable life and career of the 46th hereditary Ismaili Imam

Part of the Ismaili Texts and Translations Series, the book was published in honour of His Highness the Aga Khan IV Diamond Jubilee. It is the first English translation of the original Persian manuscript, the Ibrat-afza which was composed in 1850. In addition to the English and Persian texts, the book provides a detailed contextual introduction, helping readers to engage more insightfully with the Imam’s testimony, told as part autobiography and part as his memoir.

During the book launch, Dr Daniel Beben of Nazarbayev University, Kazakhstan, spoke of the text’s historical, social and cultural significance. He examined some of the key concepts within the text, including legitimacy, lineage and authority, through processes such as conflict mediation for the wider community, and the interactions between the Imam and the Qajar monarchy in Persia, who had bestowed upon him the title of Aga Khan. Dr Beben also spoke about the evolution of the 46th Imam’s role as a social, political and spiritual leader, the final decade of the Nizari Ismaili Imamate

in Persia, and the transition of the Seat of the Ismaili Imamate from Persia to India.

“The Ibrat-afza is an important historical source that helps us to answer one of the critical questions in the study of Ismaili history, namely that of how the Nizari Imams, after existing in relative obscurity for centuries after the Mongol invasions, were able to once again obtain a position of prominence in the Muslim world and beyond in the 19th century. The Ibrat-afza offers some unique insights into this development, demonstrating how the Imam was able to build support among many different Muslim communities by appealing to his sayyid

ancestry and his descent from the Fatimid caliphs.”

Dr Daryoush Mohammad Poor of The Institute of Ismaili Studies elaborated further on some of the intricacies of the text itself, including the literary themes of the Persian text, as well as an analysis of the role and voice of the narrator. Dr Mohammad Poor also explained the poetic, spiritual and philosophical traditions, which have influenced the style and content of the Persian text. He said:

“The authorship of the book is critical in the sense that it provides us with valuable information about the genre, style, the kind of poetry used and the role of dual identity and taqiyya

in the book. The book is narrated by Aga Khan I as the speaker but the author is Waqar-i Shirazi, a prominent scholarly and literary figure of the early Qajar period. The language of the original Persian is replete with literary devices and ornaments, which sometimes turns the text into a convoluted one. Yet, one of the most impressive aspects of the book is how the human voice of the narrator is palpable throughout the narrative: a voice which gives the reader an intimate encounter with the speaker’s innermost human joys, sorrows, frustrations and aspirations. Apart from being a very significant part of the contemporary literature of Ismailis, this book is also a literary piece which could be located in the broader context of humanism and adab

Dr Shabnum Tejani, of SOAS, framed the discussions to help the audience better understand the book’s purpose, as well as some of the key themes and events recounted in the manuscript.

Many members of the audience commented that they felt enriched with new knowledge and were curious to learn more about this lesser known period of Islamic history. Attendees also had the opportunity to view a manuscript of the Ibrat-afza and seals of the first Aga Khan from the 19th century, which were showcased at the event from IIS’s Ismaili Special Collections.

To learn more about the book, visit the publications page here.

Watch Highights of the Event