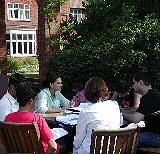 Gallery of images of the Lecturers and Presenters

The seminars, presented and facilitated by lecturers from the Universities of Harvard, Brandeis, Carleton and Victoria along with faculty members from The Institute of Ismaili Studies and the Institute for the Study of Muslim Civilisations of the Aga Khan

University, included: ‘What is Islam? Who is a Muslim?’, ‘Key Moments and Critical Junctures in Ismaili History’, ‘The Prophet and the Prophetic Tradition’ and ‘Islam and the Role of Media’.

The aims of the Summer Programme included: providing a social, cultural and civilisational introduction to Islam; engendering an understanding of Ismailism within the larger context of the intellectual and historical development of Islam; as well as providing a forum to raise questions, stimulate reflection and encourage discussion on important contemporary issues and themes in Islam and its Ismaili tariqa

. Particular attention was given throughout the Programme to include source material and intellectual perspectives from areas which often receive relatively little attention within the study of Islam, including Shi‘ism

The 2004 programme was the third Summer Programme on Islam conducted by the IIS. The first was held for undergraduate university students from July 21 - August 3, 2002 at Emory University, Atlanta, USA. The second and third Summer Programmes which were held in August 2003 and 2004, at Cambridge University, were aimed at postgraduate students, professionals and entrepreneurs, and were attended by participants ranging from 22 to 61 years in age.