Professor Nanji began his presentation by suggesting that “… as we look at the 21st century, we need to set the ground for where a shared connection exists; between the religious traditions on the one hand, and their influences on the societies of Britain, Europe, and the Muslim world…” He shared with the audience that he is “…often asked to look at Islam as a problem, primarily in the context of media stereotypes... One of the difficulties when approaching a subject matter a t a time of crisis is that your methodology for approaching it becomes problematic...” He suggested that as we look at Islam in the 21st century, we need to develop a vocabulary and a way of understanding that sees it as part of a global phenomenon and a history of cultures and civilizations that is part of our common heritage. 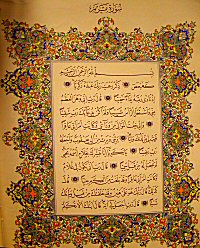 To illustrate the shared connections and traditions that exist, Professor Nanji elaborated on the importance of the shared values and history of revelations. Biblical personalities, including the figures of Jesus and Mary, are also referred to in the Qur’an

. On the screen behind him, with an image of a page from the Holy Qur’an, the most important text for Muslims everywhere, Professor Nanji pointed out that there was an entire sura

or chapter devoted to Mary in the Qur’an, called Sura al-Maryam in Arabic (chapter 19). He elaborated that “… it is actually a story of all the paradigmatic values that are associated with Mary in the Christian tradition as well as in the Muslim tradition ... a powerful figure of piety, of virtue, of beauty and all of those ideas are mentioned in the Qur’an…”

In referring to the 16th century, when Berkhamsted Collegiate School was founded, he highlighted how the medical curriculum of European universities used the classic work of the Muslim philosopher and physician Avicenna (Ibn Sina). This reflected a bridge through which knowledge had passed from the Muslim world to Europe.

Professor Nanji concluded his presentation by restating that the way to move forward was from a place of shared history and of shared space. “The narrative that will guide the way we look at the exchange of ideas, of knowledge, etc. is changing and a part of trying to understand Islam in the 21st century is to see how that narrative can be rewritten through proper education.” In this context, he referred to programmes that were being developed by the Aga Khan

Development Network institutions to broaden knowledge and understanding of Muslim cultures and civilizations.

Berkhamsted School was founded in 1541 by John Incent, Dean of St. Paul’s, who was granted a Licence by Henry VIII to establish a school in Incent’s home town. From its establishment, Berkhamsted school served as a grammar school for male students from the local town, developing in the last century into a school providing quality education. In 1888, the foundation was expanded to establish The Berkhamsted School for Girls. These two schools formally merged in 1996, to become Berkhamsted Collegiate School, offering single-sex and co-educational opportunities for academic excellence to pupils from ages 3 to 19 years. Currently, there are more than 1500 students enrolled at Berkhamsted Collegiate School.