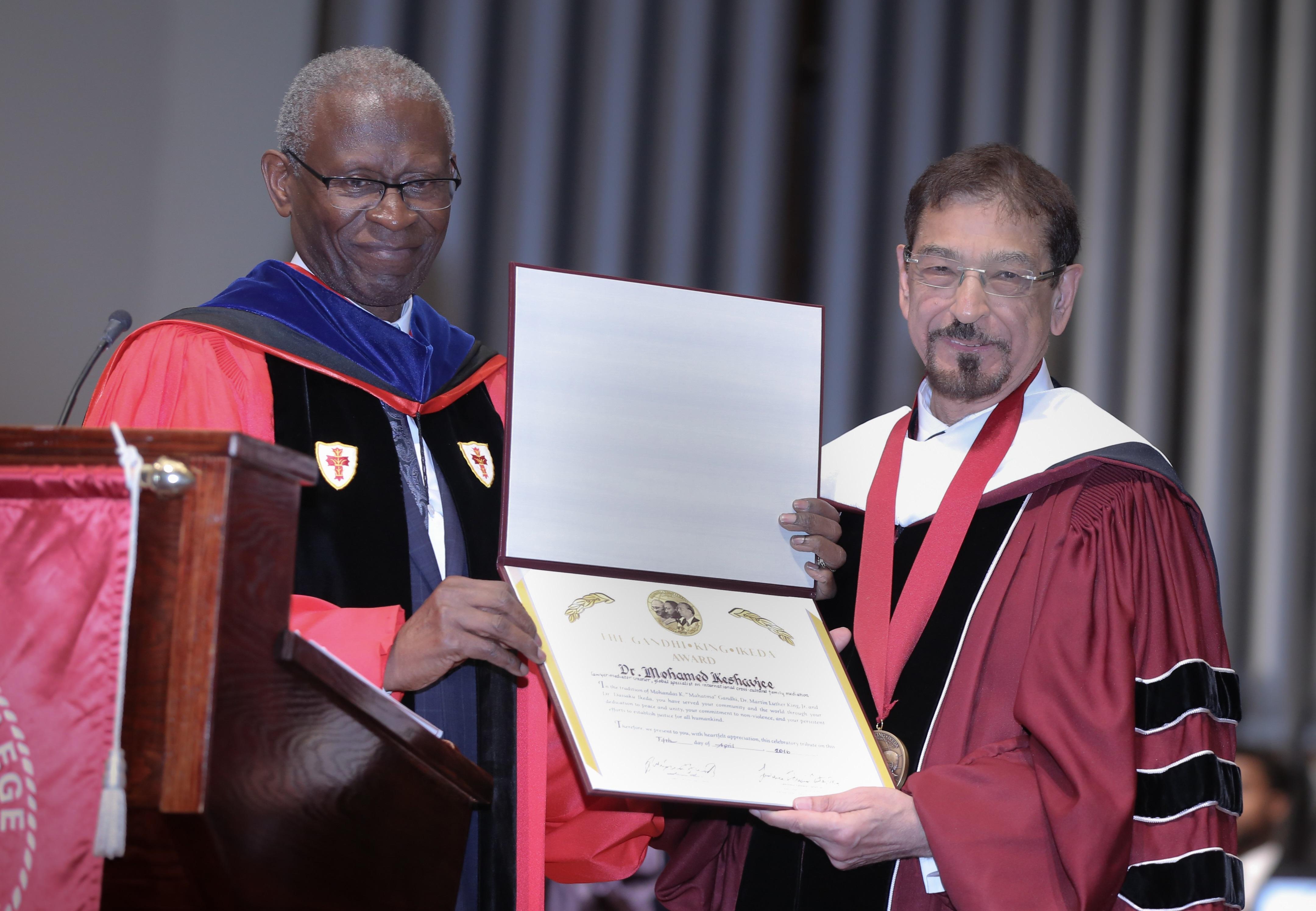 A Governor of The Institute of Ismaili Studies, Dr Mohamed Keshavjee, was honoured with the prestigious Gandhi King Ikeda Award for Peace, for his contributions in the area of mediation and peace studies. Dr Mohamed Keshavjee was presented with the award in Atlanta on 5 April 2016 at the Annual Peace Fair and Interfaith Assembly hosted by the Martin Luther King Jr. International Chapel at Morehouse College.  The Award in the past has included Nelson Mandela, Desmond Tutu, Mikhail Gorbachev, Michael Nobel, Hassan Ibn Talal, Fetulleh Gulen Rosa Parks and Andrew Young.

Dr Keshavjee delivered the keynote address entitled Gandhi, King and Mandela - Precursors to Transformative Mediation in the Twentieth Century at the event commemorating the 48th anniversary of Dr King’s demise.  Attendees included the President of the University, John Silvanus Wilson, the Consul General of India, Nagesh Singh, the President and members of the Ismaili Council for the USA, representatives of the Gandhi King Ikeda Heritage, interfaith leaders, government leaders and members of civil society.

In his speech, Dr Keshavjee highlighted the roles Mahatma Gandhi, Martin Luther King and Nelson Mandela played in reversing the negative spiral of conflictual relationships with their adversaries, which in conflict situations usually leads to hate, anger and self-absorption, into positive, transformative ones, such as love, humanisation and positive constructive energy and in the process changed the destiny of millions.

In a statement made prior to the ceremony, the organisers said:

“Dr Mohamed Keshavjee will be honoured with the Gandhi King Ikeda Award for Peace in recognition of his ongoing dedication to emphasing the role that cosmopolitan ethics and transformative mediation play in promoting peace and human rights education. The Award signifies the values practiced and preached by Mahatma Gandhi, Dr Martin Luther King Jr and Dr Daisaku Ikeda, celebrating the three great leaders' commitment to humanitarianism and non-violence.”

Dr Lawrence Edward Carter Sr, Dean of the King Chapel said, “[Dr] Keshavjee articulates and embodies the principles most characteristic of these exemplars and his contributions advance the human capacity to realise Dr King’s vision of a world distinguished by the dignity of nature with rights in the order of the law.”

In his citation, Dr Carter further added: “You have served your community and the world at large through your dedication to peace and unity, your commitment to non violence and your persistent efforts to establish justice for all humankind.”  Speaking about the Ismaili community’s endeavours in the USA, he said: “Their initiatives in Georgia, in promoting dialogue and bridge-building with other faith communities, resonates with Martin Luther King Jr.'s dream. Its members have collaborated with local museums and universities in cultural and educational initiatives as well as in numerous service projects. The ethos of voluntary service, self-reliance, and good citizenship have been a hallmark of the Ismailis throughout history.”

Over the past three decades, Dr Keshavjee has worked with the secretariat of His Highness the Aga Khan

and the Aga Khan Development Network. Currently he advises on various global advisory panels and is a reference point on international inter spousal child abduction to the Hague Conference on Private International Law where he has been invited to speak at their Malta Conference in May 2016.

Dr Keshavjee is an esteemed academic and the author of two publications.  His most recent book is a memoir, Into that Heaven of Freedom, which was published in late 2015 and explores his ancestral connections in Gujarat and other areas of India, migration to East Africa and apartheid in South Africa. The book chronicles the history of South Asians in Africa and more specifically the arrival and settlement of the Ismaili community in the country   with a particular focus on the role played by Mahatma Gandhi in the evolution of African political consciousness.  Earlier, he had published Islam, Sharia

and ADR-Mechanisms of Legal Redress in the Muslim Community which is referred to in the field of mediation in various European and North American universities.

Referring to the Award, Dr Keshavjee said: “This is a recognition of the contribution that the Ismaili community has made globally - under the guidance of His Highness the Aga Khan - to the evolution of a robust and sustainable civil society, a factor so critical in ensuring greater democratic competence in today’s conflicted world.”