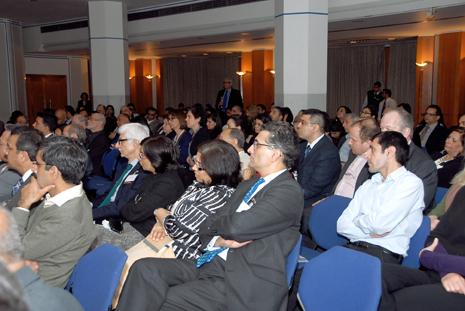 The IIS is pleased to announce the launch of a new Shi‘i Heritage Series of publications aimed at enhancing general knowledge of Shiʿi Islam and promoting a better understanding of its history, doctrines and practices in their historical and contemporary contexts.

The first event took place at the Ismaili Centre in London on 3rd April, 2014 at which the first two publications, A History of Shi‘i Islam by Dr Farhad Daftary and The Study of Shi‘i Islam by Dr Farhad Daftary and Dr Gurdofarid Miskinzoda were launched. Another event is scheduled to take place in Lisbon, Portugal, on 19th June, 2014. The publication of these two books is a milestone in the history of the Institute as it builds on its track record as an established research and teaching institution on Ismaili Studies and embarks on a journey of further research and discourse on the broader subject of Shi‘i Studies.

Dr Nadia Jamal acted as the moderator of the hosted conversation with Dr Farhad Daftary, the General Editor and Dr Gurdofarid Miskinzoda, the Managing Editor of the series. The speakers provided short introductions to the two publications as well as details regarding the rationale behind the series and its future vision.

The Series hopes to address the main Shiʿi communities in a balanced and inclusive way, engage in discussions on theoretical and methodological issues, and inspire further research in the field. Works published in this series will include monographs, collective volumes, editions and translations of primary texts, and bibliographical projects, bringing together some of the most significant themes in the study of Shiʿi Islam through an interdisciplinary approach, making them accessible to a wide readership.

and sets the tone for the series, including a historical survey of the four communities who account for the majority of the Shi‘i Muslim population of the world – the Isthna‘Asharis, the Ismailis, the Zaydis and the Nusayris (now commonly known as the Alawis).

The Study of Shi‘i Islam explores the contributions of the different Shi‘i communities to eight diverse subject areas – history and historiography, the Qur’an

and its Shi‘i interpretations, hadith

, law, authority, theology, rites and rituals, and philosophy. In so doing, it examines how the understanding of the various branches of Shi‘i Islam has evolved over time.

Commenting on the IIS, one attendee said: “The Institute reaches out to a wide audience and presents its work with care and in a manner accessible to all. It is concerned with promoting the study not only of Ismaili Shi‘i Islam but also of the wider Shi‘i community in a way that is accessible and generous.” Also speaking about the IIS, another attendee had this to say: “Although the focus is on Shi‘i and Ismaili studies, the Institution has contributed significantly to other areas of Islamic studies, as its work has many facets.”

The event was well attended by academics in the field as well as diplomatic representation from the Tajikistan Embassy, the German Embassy, the Pakistani High Commission and members of the Ismaili community in the UK.
Related Pages on the IIS Website: