IIS launches the World of Islam series with The Fatimids: 1. The Rise of a Muslim Empire 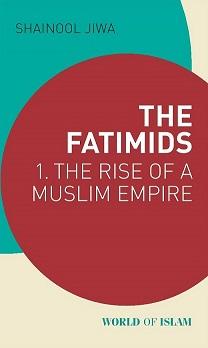 The IIS is delighted to announce the release of the first book in the World of Islam series – in print, e-book and audiobook formats. This new series has been created for a general, non-academic, audience in order to provide engaging introductions to historical, cultural, social and religious topics that explore the rich diversity of Islam. Aimed at Muslim and non-Muslim readers alike, these accessible books are intended to spark deeper interest and to stimulate people to think differently about Islam.

To date, the publications of the IIS have been mainly academic books for a scholarly readership – the IIS has been instrumental in securing the field of Ismaili studies, as well as contributing significantly to Shi‘i and Islamic studies more widely. It was felt that the time is ripe to bring the robust scholarship for which the IIS is known to a broader audience, who could benefit from reliable and interesting introductions to relevant Islamic topics.

-caliphs, and the founding of their Shi‘i empire (909–1171). Dr Shainool Jiwa, an Islamic historian specialising in the Fatimids

, on whom she has published and lectured extensively, presents a concise overview that conveys heartfelt enthusiasm for her subject.

As the first of a two-part story, The Fatimids: The Rise of a Muslim Empire charts Fatimid beginnings in North Africa in 909, including their expansion to the likes of Sicily and Sind

(modern-day Punjab, Pakistan), up to the founding of Cairo in 969. Following the first period of concealment for the Ismaili Imams (765–909), Abd Allah al-Mahdi

emerged as the Fatimid Imam-caliph

in 909, marking the birth of the Fatimid Empire. From the reigns and rebellions under the first four Imam-caliphs, to the vibrant capitals founded in Mahdiyya, Qayrawan

, and Mansuriyya, Dr Jiwa takes readers on a journey of discovery through the formative years of this Shi’i Ismaili dynasty.

At its height, Fatimid rule extended across North Africa, to as far as Mecca and Medina. The distinctive empire spanned over two-and-a-half centuries, during which both political achievements and cultural production ensured that the thought, literature and heritage of the peoples in Fatimid lands were able to flourish.

“The Fatimid epoch is a significant precursor of attitudes that are appropriate for the 21st century. It was a time in which intellect played a major role in society, and when relations between Muslims and non-Muslims were admirable: warm and respectful. So, there is much to be learnt from the Fatimid period that can help inform the way we live our lives today.”

While the past shapes our present, it is important to remember that one civilisation’s rise is often another’s decline, and accounts of the past differ according to who is constructing the narrative. By broadening our perspectives about the subjectivity of the past, we can adapt appropriately to the future.

Commenting on the book, Michael Wood, the historian, writer and broadcaster well known to many for his critically acclaimed documentaries, said:

“Although so much of the written legacy of the Fatimids was lost with the destruction of the libraries of Cairo in the 12th century, during the collapse of the dynasty - leaving the narrative to be shaped by powers ideologically opposed to the Shia

– as Dr Jiwa demonstrates in this clear and penetrating book, enough remains to see the rich possibilities of another way of viewing Islamic history. This book will be essential reading for students of the history of Islam, but also a valuable source of reflection for anyone interested in the story of civilisation. It’s an amazing tale, presenting a new portrait of the Mediterranean world in one of the most creative periods in its history.”

It is hoped that through the World of Islam series, people will better appreciate the many nuances of Islam as a faith, civilisation and culture. The more we can all understand about the beliefs and customs of our global neighbours, as well as about our collective past, the greater our chances of living together harmoniously, with human beings benefiting one another and our shared planet.

Revealing the diversity of Islam through a civilisational and historical lens in the case of the Fatimids, this initial book in the World of Islam series sets the tone for the wide variety of topics to be covered. Forthcoming titles will cover the diverse Muslim spaces of worship, and the life of Prophet Muhammad. All the following publications in the series will also be available in print, as an audiobook and e-book.

IIS Publishes Second Volume in its Shi‘i Heritage Series
IIS’ Philosophy
The Fatimids: The Rise of a Muslim Empire