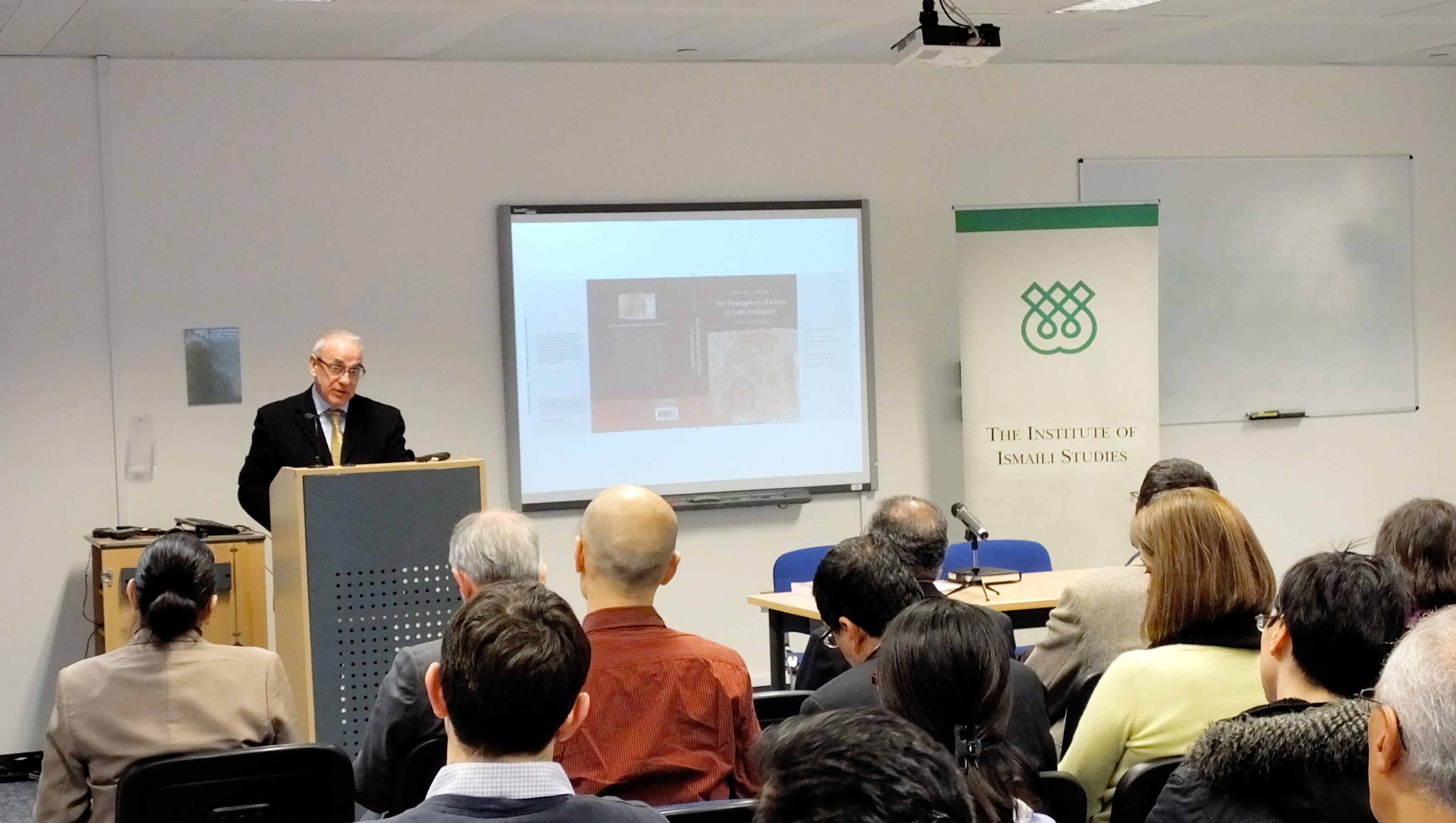 The Qur’anic Studies Unit at the IIS inaugurated its Book Review Lecture Series with a lecture by Professor Aziz al-Azmeh on 3 February 2014. The lecture was based on Professor Al-Azmeh’s latest book, The Emergence of Islam in Late Antiquity: Allah and His People (Cambridge, 2014). He presented the book as an answer to the myriad questions about the various studies conducted in the last few decades on the period known as ‘early Islam,’ while proposing a new approach.

Professor al-Azmeh began his talk by surveying a number of problematic methodologies that have been used by historians of Islam over the past decades to study ancient Islamic sources. He proposed that it is possible to read historical sources and make sense of them. He thus rejected the hypercritical methods of schools that reconstruct Islamic history only from external sources, that is, sources that are non-Islamic.

Professor al-Azmeh’s book finds its raison d’être in the necessity of taking a step back and reflecting on the methods, the results and the conceptual tools used by historians to think about ‘early Islam’. However, rather than simply criticising current scholars of Islam, he proposes a new method for interpreting the source material. To this end, he analyses and redefines the major historiographical category of‘late Antiquity’, situated between 400 and 700 CE.

In his book, Professor al-Azmeh arrives at an alternative understanding of‘late Antiquity’. In his lecture he described this as an inclusive concept in which the Islamic element does not appear as an exception. This approach integrates Islam into the larger dynamic of late Antiquity, not only in terms of its religious evolution but also its political, social and linguistic evolution.

Professor al-Azmeh proposes a number of key notions that make possible a new history of early Islam. The notion of Paleo-Islam is the most important one. He situates this historical period between 600 CE and 632 CE, and considers it a testament to the achievements by Prophet Muhammad and his entourage of the main elements that would determine the Islamic classical tradition. According to Professor al-Azmeh, classical Islam emerged as a result of the accumulation of a number of conditions: the role of Prophet Muhammad, his charisma and his political strategy were all crucial in this picture.

An important part of the lecture was dedicated to the Qur’anic text. The Qur’an

constitutes both an object of study and source material. Various sources are used in order to reconstruct the history of the Qur’anic text: epigraphic sources, manuscripts as well as later narratives. Particular criticism has been directed towards a certain simplification of the textual analysis of the Qur’an, one which is based on noting the intertextuality between the Qur’an and non-Islamic texts of late Antiquity. Professor al-Azmeh tackled the crucial questions related to the Qur’an – its dating, its author and transmitters, its composition and its historical value, among others.

A particular creativity in the study of Professor al-Azmeh emerged from his hypothesis about the way in which the text was composed and how it evolved to become a canonised mushaf. Various textual genres had been in gestation during the period of Paleo-Islam that gave rise to the book that appears, essentially, as the result of a political event.

The lecture described the process of transformation that occurred in late Antiquity and gave rise to Islam; this involved the transition of a society from polytheism to monotheism, and the transformation of fragmented forms of texts to one consolidated canonical text (mushaf). The creation of an empire in which Prophet Muhammad is the leading charismatic figure is the most important factor.

The study of Islam as an integral historical element of late Antiquity implies a new definition of both concepts. A web of related concepts emerge from these new definitions and determine the picture portrayed by Professor al-Azmeh in his book and his lecture, such as the very concept of Allah, to which the speaker dedicated an innovative and fascinating analysis.

Professor Aziz al-Azmeh is a professor at the School of Historical and Interdisciplinary Studies, Central European University (CEU), and is the director of the CEU’s Center for Religious Studies. He has published numerous works in English and Arabic, includingIslams and Modernities(London, 1993, 1996, 2009),Muslim Kingship: Power and the Sacred in Muslim, Christian, and Pagan Polities(London, 1997) and Ibn Khaldun: A Reinterpretation (Hoboken, NJ, 2012).