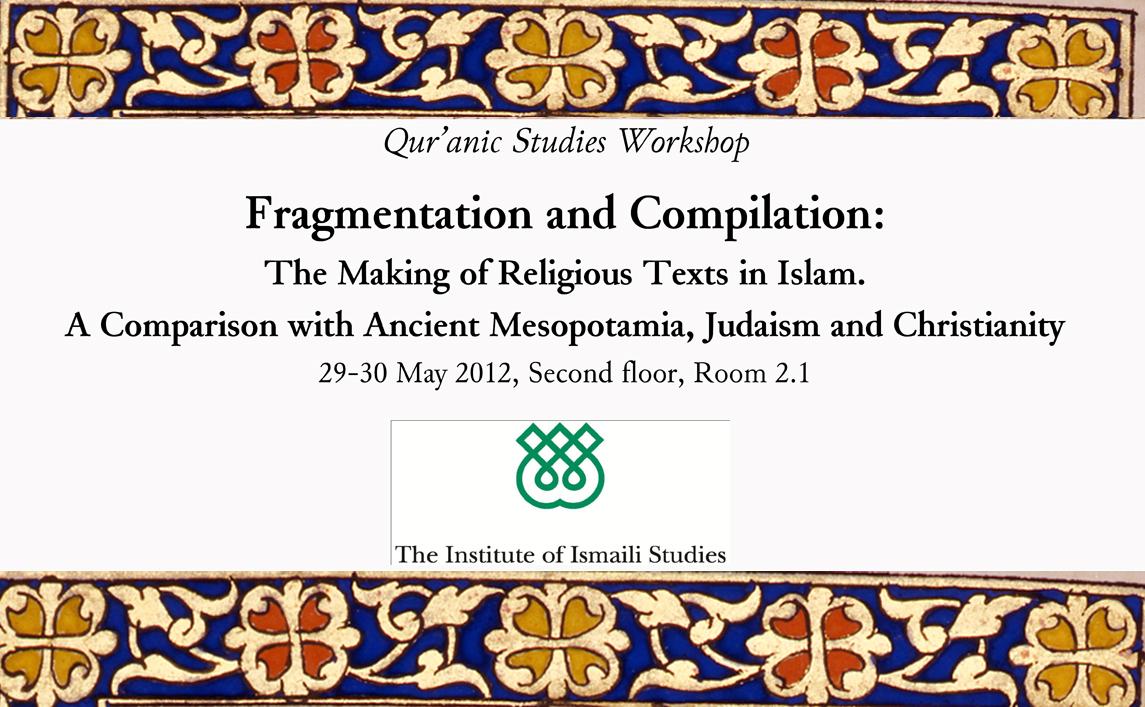 This was the sequel to the workshop Fragmentation and Compilation: The Making of Religious Texts in Islam: A Comparison with Ancient Mesopotamia, Judaism and Christianity in 2012. Both workshops were convened by Dr Asma Hilali, Research Associate at the Institute. Building on the first workshop, the second part had two main points of focus: (1) the examination of the state of the field of Qur’anic studies; and (2) the contribution of the fragmentation/ compilation approach to Qur’anic studies.

The workshop explored the concept of ‘Fragmentation,’ in the study of a sample of religious texts from Islam and other traditions. More than a textual phenomenon, the Fragmentation/Compilation approach refers to a methodology that considers the various forms of a text and more specifically its ‘fragmented,’ form, as part of the history of its transmission. This approach implies a critical attitude towards the prevalent method in textual studies, which considers the history of a text only in its book form.

The example of the Qur’an

here is instructive, since the Qur’anic text was transmitted in fragmented form both before and after its final collection and assembly into one book “between two covers”. The fragmentary nature of the text reflects the history of its transmission and has to be taken into account in the study of Qur’anic manuscripts, Qur’anic inscriptions and the reception history of the Qur’an, as well as in the study of Jewish-Christian narratives and their relation to the Qur’anic text.

The workshop offered many inter-disciplinary tools for the analysis of texts and served to supplement, or even override, two conceptions in Qur’anic studies – the assumption that there must have been an ‘original book’, an assumption that may be unhelpful if taken as a dogmatic axiom that does not require any scholarly substantiation, and inversely, the equally dogmatic assertion that the idea of ‘original book’ is but a pure myth and thus must not be subjected to any kind of scholarly analysis and substantiation.

In the introduction to the workshop, Dr Hilali addressed a set of conceptual and methodological questions surrounding the topic of Fragmentation and Compilation: What is meant by Fragmentation/Compilation? Why focus on these particular notions? What could the Fragmentation/Compilation approach introduce to the field of Qur’anic studies with its various problematics of chronology, textual composition and intertextuality? Following the Latin etymology of the word fragmentum, the fragment is defined as ‘a part broken off or otherwise detached from a whole’. The fragment presents itself as a closed unit detached from its totality and thus refers to an intriguing absence: the absence of the whole. This definition shows that the fragment implies a missing totality and represents a complex aspectof non-accomplishment and non-achievement while at the same time possessing an aspect of closure and termination.

After the introductory remarks, the first session of the workshop looked at the state of the field of Qur’anic studies. To this end, an overview of three current international projects on the Qur’an were presented : (1) The ‘Qur’an Seminar’ project of the University of Notre Dame was presented by Dr Mehdi Azaiez (Laboratoire d’excellence ‘Religions et Sociétés dans le Monde Méditerranéen’); (2) the ‘Jewish-Christianity and Islam’ project of the University of Nottingham was presented by Dr Holger Zellentin (University of Nottingham); and (3) the ‘Corpus Coranicum’ project of the Berlin-Brandenburg Academy of Sciences and Humanities was discussed by Dr Stephen Burge , Research Associate in the Qur’anic Studies Unit at the IIS. This was followed by Dr Hilali’s overview of the current studies on Qur’an manuscripts. An open discussion, ably conducted by Prof. Aziz al-Azmeh, followed these presentations.

In the second session, five papers were presented, each dedicated to the phenomenon of Fragmentation/Compilation in specific religious textual traditions. Dr Hilali presented a paper entitled ‘Repetition and Variation and the Problem of “Qur’anic Variants”’; Prof. Frédéric Imbert spoke on the topic of ‘Fragmentation and Variation in the First Islamic Graffiti (1st–2nd Century AH)’; Dr Burge spoke on ‘Fragmentation, Compilation and Discourse: A Comparison of Three Arba‘un Collections on Jihad

and Martyrdom Compiled in the Late Mamluk Period’; Dr Zellentindelivered a paper on ‘The Qur’an’s Fragmentation and Realignment of Gospel and Talmud’; and Dr Azaiez gave a talk on ‘Unity and Fragmentation in the Standard Text of the Qur’an: The Prophet as First Addressee and the Dialogic Argumentation’.

Parts I and II of the workshop will give rise to two published volumes, the first one on Contemporary Studies on the Qur’an, the second one on Fragmentation and Compilation: The Making of Religious Texts in Islam.

A review of the workshop by Holger Zellentin can be found on the website of the International Qur’anic Studies Association (IQSA).
Related Pages on the IIS Website: