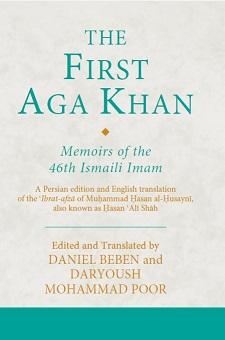 As part of its Diamond Jubilee series of publications, the IIS has released the first English translation and a new Persian edition of the memoirs of Aga Khan I. The Persian text has been edited using the original manuscript and previously published editions in Persian, and translated into English by Dr Daniel Beben and Dr Daryoush Mohammad Poor. The book has an insightful foreword by Dr Farhad Daftary and a comprehensive introduction by Dr Daniel Beben, providing a detailed historical background and analysis of the events relevant to the life of Aga Khan

The text of the ‘Ibrat-afzā as a primary source is particularly significant in terms of three distinct contexts: the Nizārī Ismaili Imamat

; power politics at the contemporary Qājār court of Persia with its strong Sufi underpinnings; and the evolving relations between Aga Khan I and the British in India. The memoir provides insights into the Aga Khan’s move from Persia to India and details the journey he and his companions made in the middle of the 19th century. It begins with a brief account of his childhood and the relationship the Ismaili Imamat had with the Qajar dynasty, before exploring the tensions that arose between the two, and the final departure of Aga Khan I from Persia. The book details the subsequent settlement of Aga Khan I in India, which effectively moved the Seat of the Nizārī Ismaili Imamat there in 1851, after being in Persia for more than seven centuries.

The introduction to the memoir provides audiences with valuable contextualisation on the relations between the Ismaili Imamat and the Qajar kings and the Nimatullahi Sufi order. Closer ties were established between the Imamat and the Qajars as a result of the marriage of Aga Khan I with Fath Ali Shah’s daughter, after the murder of Shah Khalilullah, the 45th Ismaili Imam

, in Yazd. Upon the submission of the grievances of the Imam’s widow to the Qajar monarch, the next Ismaili Imam, Muhammad Hasan al-Husayni, also known as Hasan Ali Shah, was given the title ‘Aga Khan’ by the king. The king then gave his daughter in marriage to the Ismaili Imam and returned the estates of Mahallat and Qum

Speaking about the significance of the book, co-editor and co-translator, Dr Daryoush Mohammad Poor said:

“The ‘Ibrat-afzā is particularly important because it is one of the first pieces of primary literature about the modern period in Ismaili history. Moreover, the text of the memoirs captures some of the key doctrinal aspects of the Ismaili community, namely the foundations of the authority of the Imam as it is anchored in prophetic traditions and verses from the Qur’an

. It also gives historical details about the interactions of the Ismaili Imamat with his contemporaries among political figures of Persia and India. If we take into account the purpose of the writing of this book, it is evident that it is not a comprehensive narrative of the departure of Imamat from Persia to India and the subsequent events in India, even though it provides valuable details from the perspective of the Ismaili Imam.”

The ‘Ibrat-afzā also enables readers to better understand the intimate relations of the Ismaili Imamat with the Nimatullahi Sufi order of the time. At various points throughout the narrative there are paragraphs which speak about the spiritual authority of the Ismaili Imam, contextualising the role of the Aga Khan not simply as a Qajar prince, the son-in-law of the Qajar monarch, but also as a descendant of the Prophet through his daughter, Fatima

and his son-in-law, Ali. In the opening of the memoir, the Aga Khan alludes to his lineage and the grounds of his authority in the following terms:

“Blessings be on the rightful executors and the true saints, generation after generation, who are in every one of the ages and eras, the referents of this blessed verse: ‘Oh you who believe! Obey God, and obey the Apostle, and those among you who possess authority.’ And the content of the hadith

: ‘Verily I am leaving among you two weighty things, and if you hold on to them you will not go astray after me: the book of God and my progeny/household. They are two outstretched ropes and they will not break and will not be cut until the Day of Judgment, until the two join me at the pond in the hereafter’, is a tradition that applies specifically to their generous existence.” (p. 77).

This Diamond Jubilee publication which sheds light on the life of Aga Khan I will be of interest to both a general reader and the scholarly community. It is an integral part of the scholarship on Ismaili studies in modern times and the history of the Imamat and the Ismaili community in the modern period.