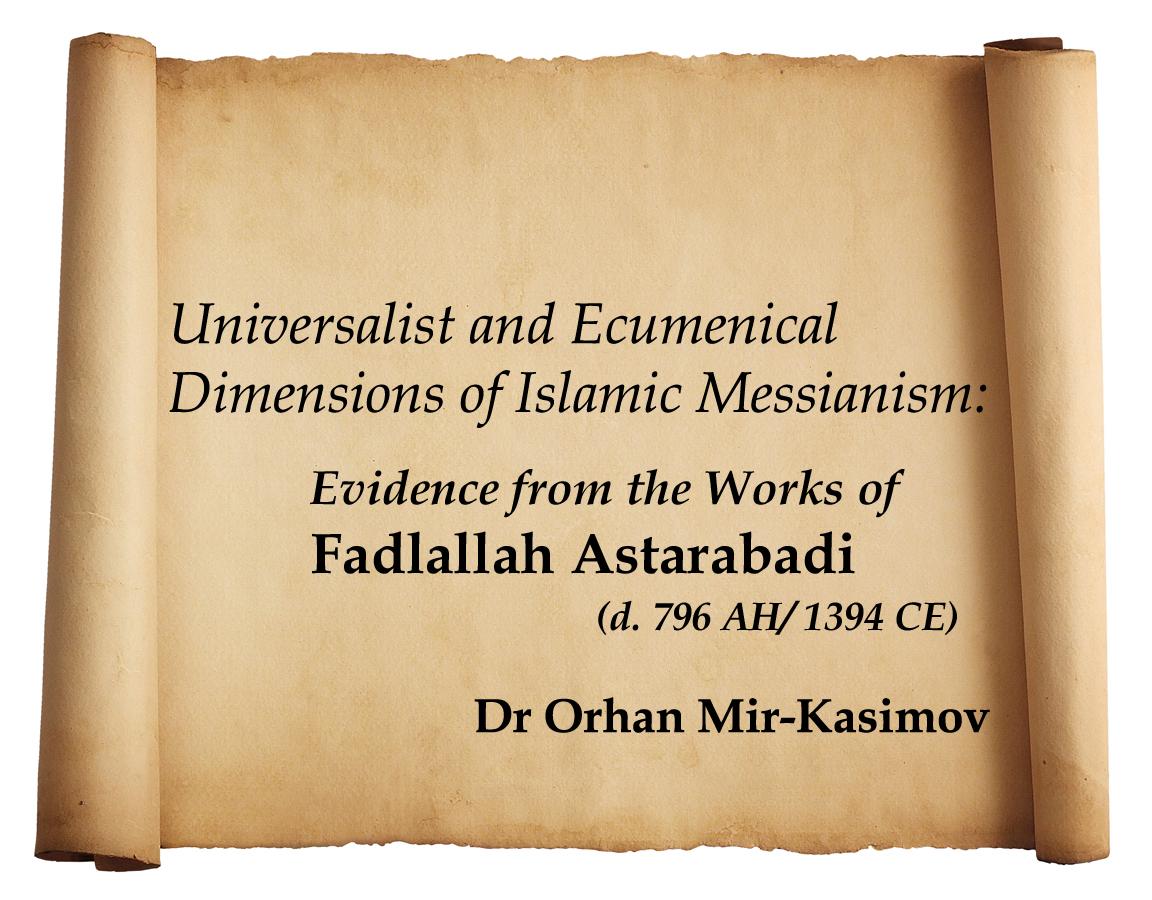 The paper entitled Universalist and Ecumenical Dimensions of Islamic Messianism: Evidence from the Works of Fadlallah Astarabadi (d. 796 AH/1394 CE), began with a reflection on the place of mystical and messianic movements in the intellectual and socio-political history of Islam, focussing specifically on those that emerged in the Eastern Muslim world in the period following the Mongol invasion.

This reflection led the presenter to the following conclusions. First, the elaborated doctrines of the messianic movements of the 8th– 9th CE centuries (14th – 15th AH centuries) did not appear out of nowhere, but that their theoretical basis was prepared in the period immediately preceding the Mongol invasion.

Second, in considering the evolution of Muslim societies whilst paying attention to the complex interplay between the various patterns of religious authority (one of which was represented by the still understudied mystico-messianic current), a more balanced approach to the historiography in general can be achieved by not focusing exclusively on one particular case of their synthesis represented by the jurisprudential paradigm.

Third, central features of the post-Mongol mystico-messianic current included such tendencies as universalism, unification of the Muslim community, synchronisation of the Sufi and Shi‘i currents and Sunni/Shi‘i synthesis, often associated with an ecumenical perspective open to the interreligious dialogue, in particular with the Jews and the Christians.

In the second half of the lecture, Dr Mir-Kasimov cited and discussed some passages from the works of Fadlallah Astarabadi, the founder of the Hurufiyya

, which was one of the most influential mystico-messianic movements of the post-Mongol Iran and later in Anatolia. Fadlallah’s doctrine was strongly influenced by Shi‘i and Sufi esotericism. The cited passages, containing interpretations of the Biblical texts, supported the idea that Fadlallah may have attempted a restoration of the ecumenical and universalist dimension of Islam from a messianic perspective that was proper to him.

Towards the 9th AH/15th CE century the mystico-messianic doctrines were recognised by the various political leaders as a possible basis for legitimisation, and this could have played a significant role in the consolidation of the Ottoman, Safavid and Mughal empires. After having fulfilled its role, both in the intellectual and geo-political reorganisation of the Muslim world, the mystical and messianic pattern ceded its place to reformed versions of the proven jurisprudential configuration. The crisis was overcome, and the Muslim community entered a new era.

In conclusion, Dr Mir-Kasimov mentioned his edited volume, Unity in Diversity: Mysticism, Messianism and the Construction of Religious Authority in Islam, Boston - Leiden, Brill (Islamic History and Civilization 105), 2013, and monograph Words of Power: the Original Hurufi Doctrine According to the Jawidan-Nama-yi Kabir of Fadlallah Astarabadi, forthcoming in the Shi‘i Heritage series of The Institute of Ismaili Studies, both relevant to the topic of the lecture.
Related Pages on the IIS Website: