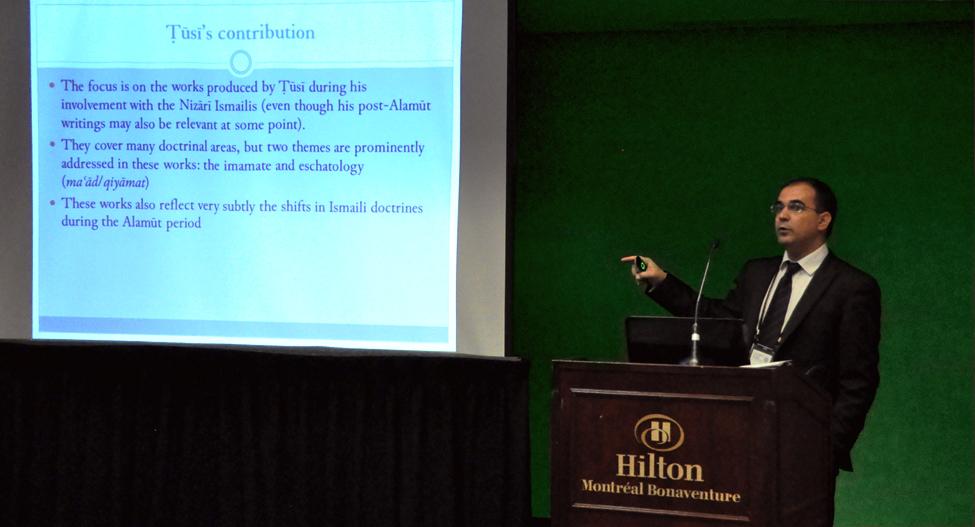 Dr Daryoush Mohammad Poor delivered a paper as part of the lecture series, Political Violence: Beyond the Secular/Religious Divide organised by the Royal Netherlands Academy of Arts and Sciences (KNAW) at Leiden University, Netherlands, on 19th September 2014. The paper, entitled Imaginative Anachronistic Leaps and Secular/Religious Myths of Terrorism: The case of Nizari Ismailis of the Alamut

Period, addresses the legends of the assassins, which are still part of academic writings (in the field of political science) legitimising narratives of violence. In this way, violence is still portrayed as an inherent part of religion, despite the assassin legends having been deconstructed to a great extent by scholars such as Marshal Hodgson (1955) and Farhad Daftary (1994).

Such imaginative narratives, which are often almost entirely unaware of modern academic developments or disinclined towards further investigations, serve to enhance the religious-secular dichotomies of violence and terrorism. This paper, which is part of a book due for publication in 2015, serves to bridge the gap between Ismaili studies, Ismaili historiography, political theories and modern narratives of violence.

Dr Daryoush Mohammad Poor also participated in the Tenth Biennial Conference of Iranian Studies of the International Society for Iranian Studies held in Montreal, Canada, on 9 August 2014. He presented a paper entitled Precedents to Rethinking Models of Authority among Nizari Ismailis: The Case of Tusi, on the contribution of Nasir al-Din

among Nizari Ismailis.  The paper specifically dealt with how Tusi played a critical role in the articulation of the doctrine of ta‘lim and its connection with tawhid

The paper also addressed how the doctrine of qiyamat was perceived in different periods with various degrees of elaboration by the Imams, the scholars in the community, and the daʿwa system. Articulations of this theme during the late Alamut period appear to build on Tusi’s writings in his major works, namely Sayr wa suluk, Rawday-i taslim, Matlub al-muʾminin and Aghaz wa anjam. All of these texts are available in translation under the titles of Contemplation and Action (IIS 1998), Paradise of Submission (IIS 2005), and Shi’i Interpretations of Islam (IIS 2010).

Dr Poor’s presentation utilised quotations from fragments of rare, unpublished manuscripts (from the collection of the IIS-ISMC Joint Library) of the Alamut period, elaborating how the doctrine of qiyamat was understood during that time.