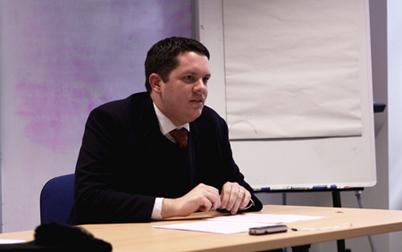 Dr Stephen Burge, who specialises in the religious works of al-Suyuti in the Institute’s Qur’anic Studies Unit, attended the School of Mamluk Studies Conference which was held in Venice on 22-25 June 2014.

Each year the conference devotes one day to focus on a particular figure or theme within Mamluk Studies. This year’s focus was on the life and work of the late-Mamluk polymath Jalal al-Din

Dr Burge presented a conference paper entitled Al-Suyuti’s Qur’anic Hermeneutics Revised: A Comparison of his Tahbir and Itqan; illustrating the way al-Suyuti worked as a scholar, specifically how he used and revised his older writings when producing new works.

(The Book of Perfection in the Sciences of the Qur’an), and its relationship to his earlier contribution to the field, Kitab al-Tahbir fi ‘ilm

al-Tafsir (The Refined Book on the Knowledge of Exegesis), Dr Burge argued that, contrary to established opinion, the Itqan shows significant reliance on the Tahbir.

He suggested further that the Tahbir appears to have acted as a model or starting point for the much more complex Itqan. However, Dr Burge clarified that a comparative study of the two works also suggests that in some areas, al-Suyuti felt the need to completely re-work his ideas. It is for this reason that a few equivalent chapters in the Itqan and the Tahbir have little in common.

Jalal al-Din al-Suyuti was famed for his extraordinarily large output, with estimates ranging from 500 to 900 works in total. He is one of the most famous scholars of the late Mamluk period. He worked in the dying days of the Circassian Mamluk Sultanate

taking control of Cairo within a decade of al-Suyuti’s death. Although a Sunni, working at the end of the Mamluk period, al-Suyuti’s work on the Qur’anic Sciences (‘ulum al-Qur’an) provides the most in depth medieval study of ways of interpreting the Qur’an, benefitting both Sunni and Shi‘i scholarship.

The School of Mamluk Studies is an organisation that seeks to promote the study of the Mamluk world in all its aspects: history, culture and its scholarship.