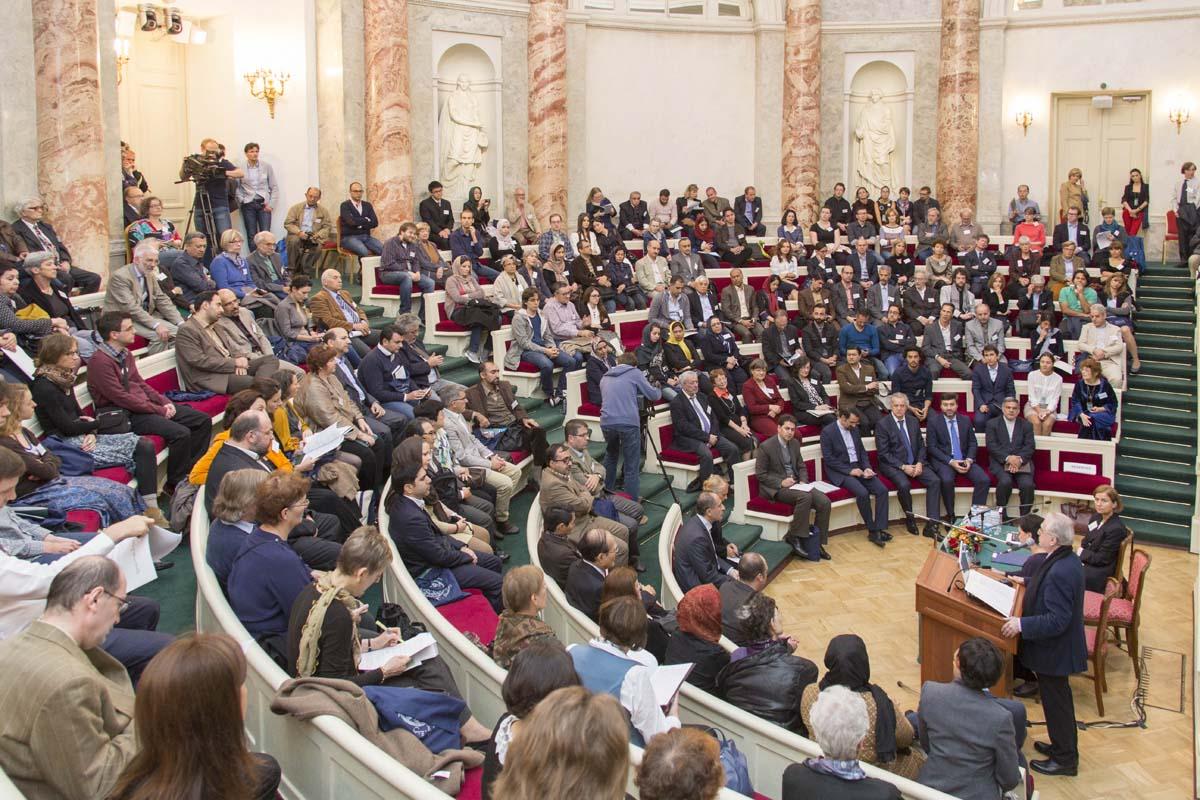 Janis Esots, an IIS scholar, presented a paper on “Henry Corbin and the Shi‘i Legend about the Green Island” at the 8th European Conference of Iranian Studies, which took place at the State Hermitage Museum, St Petersburg (Russia), on 15-19 September.  Dr Esots paper dealt with the final period of Henry Corbin’s work (approximately 1970-1978) and his attempts to build new (and rediscover old) bridges between European and Oriental esoteric spiritual traditions.

The French scholar Henry Corbin (1903 - 1978) was a philosopher, theologian and professor of Islamic Studies at the École pratique des hautes études in Paris, France.  Corbin is said to be responsible for redirecting the study of Islamic philosophy as a whole. In his Histoire de la Philosophie Islamique (1964), he argued against the common view that philosophy among the Muslims came to an end after Ibn Rushd.

Dr Esots’ paper focused on one of Professor Corbin’s works that explores the legend of the Green Island. The earliest known version of the Shi‘i legend of the Green Island goes back to the end of the 7th AH / 13th CE century and testifies to the legal and spiritual state of the Shi‘i community of that time. The community of the faithful, insofar as it perceives itself as an integral spiritual entity, is compared with the mysterious Green Island (earlier mentioned in the accounts of Alexander the Great’s travels). During the period of occultation (ghayba) and dissimulation (taqiyya

), this community, together with its ruler, is hidden from the eyes of the non-believers.

In his discussion of the legend (En Islam Iranien, t. 4, pp. 346–367 and 390–410), Henry Corbin compares the Shi‘i Green Island with a mystical fraternity in the 14th century Strasbourg, which bore the same name. Established by Rulman Merswin (ca. 1307–1382), it followed the teachings of the Rhineland mystics Meister Eckhart (ca. 1260–ca. 1328) and Johannes Tauler (ca. 1300–1361). Corbin draws several broader parallels between the mediaeval Shi‘i ‘irfān and Rhineland mysticism that were discussed in Dr Esots’ paper. The most important of them perhaps is that of futuwwa or spiritual chivalry.

In the early 1970s, Corbin gathered around himself a narrow circle of his close friends and disciples, together with whom in 1974 he founded the Centre International de Recherche Spirituelle Comparée, better known as the Université de Saint-Jean de Jérusalem (USJJ, active until 1988). In his paper, Dr Esots argued that he viewed this circle, based on the principles of spiritual chivalry, as a modern analogue of the legendary Green Island.

Henry Corbin, along with Vladimir Ivanow, was one of the most important Western scholars in the field of Ismaili (and, more general, Shi‘i) studies in the 20th century. Therefore, Dr Esots stated, “it is important for us to know how his studies in the field were interrelated with his own spiritual biography.”

Dr Esots’ paper was presented as part of a panel entitled “Pre-modern and Modern History of Iranian Studies”. Other speakers on it were Yuka Kadol (University of Edinburgh), who spoke about Arthur Upham Pope; Oksana Vasylyuk (A. Krymsky Institute of Oriental Studies of the NAS of Ukraine), who discussed Agathangel Krymsky’s contribution to Iranian studies; and Majid Bahrevar (Yasouj University), who spoke about Jan Rypka’s Comparative Poetics in Literary History.

Dr Alessandro Cancian also presented a paper at the conference entitled ‘Shiʿi Tafsir Reconsidered: Imami Sufi Exegesis in Iran, 18th and 19th Centuries’, in which he looked at the role Shiʿi Sufi exegesis played in the wider field of early modern and modern Shiʿi Qur’anic exegesis. In his presentation, he showed how some works that have been largely overlooked by historians of Shiʿi Qur’anic exegesis, such as the nineteenth-century mystical tafsīrs by Sulṭān ʿAlī Shāh and Ṣafī ʿAlī Shāh, played a crucial role in the revival of exegesis in early modern Iran.

The conference was organised by the Societas Iranologica Europaea (European Society of Iranian Studies) (http://www.societasiranologicaeu.org/index.html ) that unites Iranologists, working in European universities and research institutes. This was the 8th conference of the Society (the previous one took place in Cracow in 2011). More information can be found at the conference website: http://ecis8.orientalstudies.ru.