IIS Staff in the Media on New Spirit & Life Exhibition 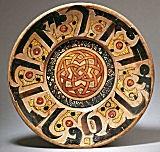 All images in this article are copyright The Aga Khan

Spirit & Life displays over 165 objects exemplifying the development and diversity of artistic traditions in the Muslim world, including portraits, textiles, manuscripts, ceramics, books of fables, tiles and musical instruments. Highlights of the exhibition include miniatures from the Persian epic Shahnama (‘The Book of Kings’), manuscripts of the Holy Qur’an

, including a page from the famed Blue Qur’an, and an extremely rare copy of the Canon of Medicine of Ibn Sina, used in Europe and the Middle East as the standard medical textbook for over 500 years.
Mr Alnoor Merchant, one of the exhibition’s curators, was interviewed for a recent article in the The Times newspaper on 11 July 2007 (read here). Mr Merchant spoke of the nature and scope of the Aga Khan’s collections of Islamic art, and discussed the recent ‘Splendori a Corte’ (Splendours of the Court) exhibition in Parma (forerunner to the Spirit & Life exhibition). He also discussed the intricacies of Islamic art, which is multi-dimensional, both sacred and secular, spiritual and alive. Mr Merchant was also interviewed for an article on the BBC News website on 21 July (read here). 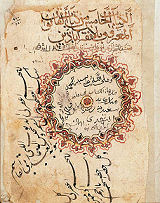 The Times article emphasised that Islamic art is not only about geometry and calligraphy, as assumed by many, but also often about love of a very human kind. This was one of the themes addressed by Professor Azim Nanji, speaking about the new exhibition on BBC Radio 4’s Today programme on 10 July 2007 (listen here). “Every religion or faith has people who look at religion in a very dogmatic or narrow way,” said Professor Nanji, “but the emotion of ‘love’ has always been at the heart of Muslim spirituality, and in fact is symbolic of the human love to the divine.” The radio interview follows Professor Nanji’s appearance on the BBC’s Newsnight on 7 June 2007 (watch the clip below), in which he spoke of the importance of art in challenging stereotypes and misunderstandings between the West and the Muslim world.

Spirit & Life will be exhibited at the Louvre in Paris between October 2007 and January 2008 and the Gulbenkian Museum in Lisbon between February and April 2008. Organised by the Aga Khan Trust for Culture, Spirit & Life showcases the permanent collection of the future Aga Khan Museum, which will open in Toronto, Canada in 2010. For more information about Spirit & Life, see the website at: www.spiritandlife2007.org. To read the speeches of the His Highness the Aga Khan and Prince Charles at the exhibition opening, see the Aga Khan Development Network website.