and other historical texts. This year an intensive Arabic summer programme was developed to offer IIS students an opportunity to improve their competence in the Arabic language as well as to study classical Arabic texts, and to learn about the culture and traditions of the Fatimids 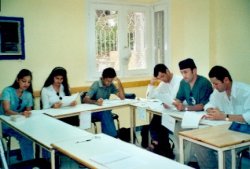 Arabic is a core subject in the first two years of the IIS Graduate Programme in Islamic Studies & Humanities. Students who come to the IIS are not presumed to have knowledge of Islamic Studies and Humanities and, as such, it has been important to develop a comprehensive and intensive Arabic Language programme, which can benefit students with varying abilities and backgrounds.

This year, the course was held for five weeks at the well-established and recognised International Language Institute (ILI) in Cairo. A tailor-made course, specific to the needs of the IIS Class of 2002, was developed by ILI in conjunction with faculty at the Institute of Ismaili Studies. The students who went to Cairo took the Modern Standard Arabic (MSA) courses according to their own level of understanding. This programme concentrated on spoken Arabic and grammar. In addition, the customised part of the course concentrated on classical Arabic. Texts included Surahs from the Holy Qur’an relating to ethics and society, and the Hadiths of Prophet Muhammad and Imam 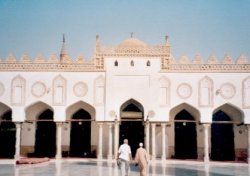 Dr Shainool Jiwa, IIS Coordinator of the programme was pleased to report: “Each of the IIS students who went to Cairo benefited tremendously from the Intensive Arabic Programme. Their confidence in Arabic language and grammar has increased considerably. The overall feedback from the students is that they felt stimulated and challenged by the programme.”

In addition to improving their language skills, students experienced first-hand the culture of the historic city of Cairo. One of the highlights of the trip was an educational walk through the city which was founded in 969 CE by the Fatimid Imams. The walk began at the northern Fatimid gate, Bab

al-Nasr, along the main artery of Fatimid Cairo (called to this day by the name of its founder, Imam al-Mu'izz li din

Allah). The students visited various Fatimid mosques along this main artery and exited from the southern Fatimid gate, Bab al-Zuwayla. They also visited the site of the Azhar Park project being developed by the Aga Khan

Three students from the Class of 2002 also attended an intensive Arabic programme at the Yemen Language Center. Yahia Baiza, Nacim Pak and Rahim Gholami attended Arabic classes and were immersed in the culture and sights of Yemen. The students visited historical sites, such as Shibam, Kawkaban, Al-Ajer and Hajja, as well as visiting the National Museum.