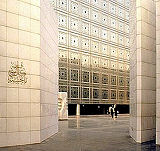 The exhibition titled “L’age D’or des Sciences Arabes” (The Golden Age of Arabic Sciences), shown at the Institut du Monde Arabe displayed a large collection of manuscripts, calligraphy, artefacts and images from the 9th to the16th centuries CE, a time when the Muslim world was at the forefront of scientific innovation and thinking. The students engaged with the contributions of great Muslim thinkers such as al-Khwarizmi, Avicenna, and Nasir al-Din

Tusi, whose works are still a point of reference for scientists and scholars around the world.

The Institut du Monde Arabe is located in an important contemporary building in Paris; located on the river Seine, it is dedicated to promoting the culture and history of the Arab world, and houses a museum, 100,000 volume library, auditorium, and offices assembled within two wings separated by a courtyard opening out toward the Cathedral of Notre Dame. The principal façade of the eleven-storey southern wing consists of 113 photosensitive panels that operate like a camera's diaphragm, opening and closing to control the intensity of light in the interior. With its distinctive architecture and commitment to bridging French and Arab cultures, the premises of the Institut du Monde Arabe received the Aga Khan Award for Architecture in 1989.

) held at the Bibliotheque Nationale de France (National Library of France). The exhibition traces the history of the three monotheistic religions from their shared roots in Mesopotamia (modern Iraq) to the present, displaying some rare manuscripts and objects which relate to the scriptures of Judaism, Christianity and Islam. The exhibition is unique as it encourages visitors to examine the different religious texts of the three religions and see the common aspirations and values they exhort, such as charity and generosity.