The Symposium, originally inspired by the number of concentrated efforts on Shi‘ism

at the 2001 annual meeting of the British Association for Middle Eastern Studies (BRISMES) in Edinburgh, Scotland, spawned a meeting of Shi‘i Studies scholars the following year at The Institute of Advanced Study, University of Bristol. Building on the successes of the first meeting, this year’s gathering developed into a significant event for British Shi‘i Studies scholars. 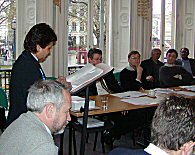 Attended by the most distinguished figures in Shi‘i Studies, Arzina Lalani, Research Associate at The Institute of Ismaili Studies and the organizer of the Symposium, invited IIS Governor and President of the Ismaili Council for the United Kingdom, Zauhar Meghji to open the Symposium at the rooftop garden of London’s Ismaili Centre. The Senior Librarian and Keeper of the Ismaili Collections, Alnoor Merchant, provided a brief overview on the manuscript holdings of the IIS Library, after which Farhard Daftary, Head of the Department of Academic Research and Publications, took the opportunity of the Symposium to formally present to Wilferd Madelung the 2003 festschrift published in his honour by the Institute in conjunction with I. B. Tauris.

The evening event also provided an opportunity for the participants to view some of the Institute’s significant Shi‘i manuscript collection. Thirty manuscripts in Arabic, Persian and the Khojki

script, copied between the 14th to the 20th century, were exhibited. In addition to prayers, aphorisms and counsels of the Shi‘i imam

The Institute of Ismaili Studies provided the venue for the Symposium’s proceedings on Sunday April 18, 2004. The Symposium approached Shi‘i Islam from multidisciplinary angles, including textual, historical, exegetical, literary and mystical approaches. The Keynote address, ‘Shi‘ism and Philosophy: a Temporary Marriage at Isfahan – or More?’, delivered by Hermann Landolt, Senior Research Fellow at the IIS, examined Shi‘ism’s long-lasting contribution to the philosophical enterprise in Islam and was chaired by Farhad Daftary. Six additional papers dealing with diverse aspects of Shi‘i Islam, both in its contemporary and historical manifestations, were presented during three sessions chaired by Andrew Newman (Edinburgh), Ronald Buckley (Manchester) and Robert Gleave (Bristol).

The Institute is planning to publish a selection of the papers presented at the Symposium alongside those of other scholars in due course.