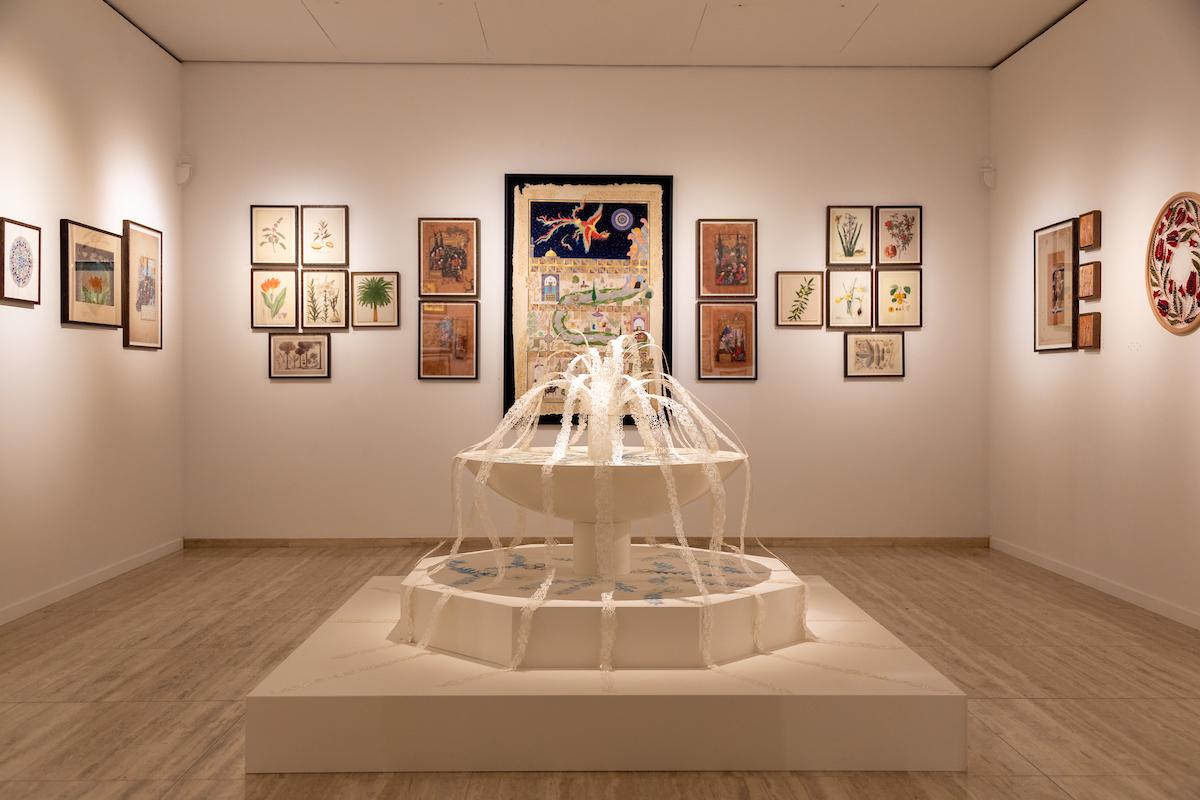 , indicating the importance of this theme to the Islamic faith. It is also the subject of myriad works of spiritual literature and poetry, where it appears as an expanse of luxuriant, verdant gardens, irrigated by rivers, ponds and fountains.

At Making Paradise’s online opening on April 29th, its curator Esen Kaya explained that the multi-sensory exhibition aimed to evoke a sense of delight and wonder around the concept of Paradise. It invites us to reflect on diverse interpretations of the concept made by artists from across the world, through a variety of materials and processes.

The walls of the gallery have been transformed into the four symbolic quadrants of the Chahar Bagh, based on the ‘four gardens’ of Paradise in the Qur’an. The central focus is a silent fountain, designed by renowned Islamic garden designer Emma Clark. From this springs a bespoke paper-cut installation of organic forms, created by American collage and installation artist Clare Celeste Börsch.

During the online opening, Emma outlined the key elements of Islamic Paradise gardens, including water, enclosure, the harmonious interweaving of architecture, flowers, scent, the sense of divine unity and peace, all of which are incorporated in the exhibition. Tom Stuart-Smith, an eminent garden designer, officially opened the show, describing it as “subtle and enagaging”.

Visitors may also view a short film depicting the many historical garden restoration projects accomplished around the world by the Aga Khan Development Network, as well as new public gardens created to enhance the environment and ameliorate the lives of those living or working nearby. Crucially, the film conveys the message of His Highness the Aga Khan regarding the significance of gardens as important spaces that build bridges and bring communities together.

The Making Paradise exhibition is presented by Aga Khan Foundation-UK, Aga Khan University -Institute for the Study of Muslim Civilisations and The Institute of Ismaili Studies. The exhibition is also in partnerships with Aga Khan Trust for Culture, the Aga Khan Museum, The Royal Horticultural Society Lindley Library, the Prince’s Foundation School of Traditional Arts and the Royal School of Needlework.

It will be accompanied in the coming months by a learning and engagement programme led by some of the artists featured in the exhibition, with details to follow.

Making Paradise runs until September 30th at the Aga Khan Gallery. Find out more and watch a short film about the exhibition here.

In line with government regulations surrounding the ongoing Covid-19 pandemic, the exhibition will open by appointment only. Tickets will be available soon through Eventbrite.

Register for a series of talks with the artists featured in the exhibition.